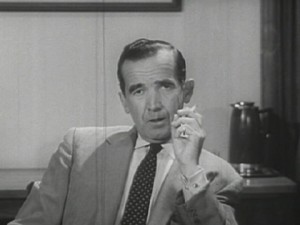 While browsing in a book shop recently, I found a dusty manual titled NBC Handbook of Pronunciation. From the 1940’s through the early 1960’s, NBC published this dictionary of sorts establishing a “standard pronunciation” for newscasters.

It is clear from the book’s introduction what kind of accent the network preferred:

…when a broadcaster speaks over a powerful station or nation-wide hookup, he will be most readily understood by the majority of his listeners if he uses the pronunciation called by phoneticians “General American.” That is the standard presented in this book.

But is this the same type of General American English that educated Americans speak today? Or has the accent evolved?

There are slight differences between then and now. For instance, the NBC guide prescribes that the final vowel in words like “happy” and “silly” be the same vowel in KIT (hæpɪ and sɪlɪ). This matches my impressions of Eisenhower-era newsmen (“John F. Kennedeh spoke today…”). It’s such a subtle difference that most listeners will hear something “old-fashioned” in 1950s anchor-speech without being able to pinpoint what.

In a similar vein, the guide advocates using a reduced vowel in words like “Tuesday” and “Thursday,” so that these are somewhat more like “Tuesdee” and “Thursdee.” Although still common in some American regional accents, almost all variants of GenAm fully pronounce the “-day.”

Vowels before /r/ seem to constitute the chief difference between mid-century GenAm and today’s GenAm. Unlike many Americans today, the NBC accent distinguished between words like “Merry” and “Marry.” It describes “Marry” as having the vowel in TRAP (mærɪ), while “terry” has the vowel in SET (tɛrɪ). Oddly, however, the guide transcribes the “a” in “arrow” as having the vowel in SET as well (ɛro). This suggests some acknowledgement that pronunciation was changing.

For the most part, however, post-war GenAm is hardly different from today’s GenAm. What has changed the most, perhaps, is our expanded definition of this accent. We allow a lot of variation these days–the Cot-Caught merger, fronting of the vowels in GOOSE and GOAT–while still placing certain accents within the loosely defined spectrum of “standard” American English.

Still, I was surprised by the book’s enlightened attitude toward linguistic diversity. Here is what the introduction says about attempts to speak “correctly:”

It should be pointed out that this book does not pretend to prescribe how words should be pronounced according to some arbitrary standard; it merely records how they are pronounced by educated speakers across the greater part of the United States. Americans have never consented to have “correct” pronunciation laid down for them by a government academy, as is done in several European nations.

This was the era in which General American English was becoming the de facto standard, and from this description, one sees why it took hold in such a populist nation. Perhaps because early proponents of General American avoided proselytizing, we were less averse to “Middle-Western English” as a national standard.

Ben T. Smith launched his dialect fascination while working in theatre. He has worked as an actor, playwright, director, critic and dialect coach. Other passions include linguistics, urban development, philosophy and film.
View all posts by Ben →
This entry was posted in American English and tagged dialects in TV, General American English (GenAm). Bookmark the permalink.