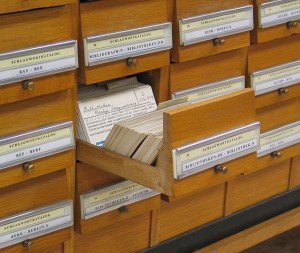 I’ve known New Yorkers who, despite exhibiting few traces of “Brooklynese,” pronounce “drawer” as if it were “draw.”* These are folks, mind you, who pronounce each and every other r, yet still maintain this r-less exception. So what’s with “draw?”

To be fair to my New York friends, most Americans pronounce “drawer” in an “illogical” way. The word technically has two morphemes (smallest units of meaning): draw + er, suggesting a container that can be “drawn” out**. But many pronounce it as if it rhymed with “lore” (i.e. had one morpheme). You’ll likely find first-graders who misspell the word “droar” or “dror” for this very reason.

A simple experiment demonstrates my point. Compare “I opened the drawer” with “Marissa was a good drawer” (one who draws). It’s likely that (if you’re American) these words are not homophones; A Californian, for instance, might pronounce the first word dɹɔɚ (“drore”) but the latter dɹɑɚ (“DRAH-er”).

Another reason we may treat “drawer” as having a single morpheme, I suspect, is because we strongly associate the suffix -er with the agentive case; that is, we add “-er” to words to suggest an active rather than passive noun. The situation is more complex than that (British “trainers” does not describe “shoes that train”). But there is something intuitively passive about a drawer, so again, we don’t tend to think of it as “something that draws.”

Since the word’s components don’t quite add up, then, few of us probably learn the term as draw-er as children. We more likely learn “drore” or “draw” or some other pronunciation that appears to be completely arbitrary.

I’m not entirely sure why New Yorkers say “draw” as opposed to “drore.” But I do know that “draw” is not really more peculiar than “drore.” Both pronunciations are exceptional, both slightly diverting from normal pronunciation patterns. To shift from one to the other requires that you swap one variant that doesn’t make sense given the spelling and etymology to another variant that also doesn’t make sense for the same reasons.

Any New Yorkers out there who conflate “drawer” and “draw?” Or others who have pronounce this word in an unusual way?

*This occurs with Eastern New Englanders and perhaps some American Southerners as well. My impression, though, is that it’s somewhat less common among people from those regions who speak General American English. Given the relative infrequency of “drawer,” though, it’s just not an easy thing to examine.

Ben T. Smith launched his dialect fascination while working in theatre. He has worked as an actor, playwright, director, critic and dialect coach. Other passions include linguistics, urban development, philosophy and film.
View all posts by Ben →
This entry was posted in American English and tagged New York Accent, words. Bookmark the permalink.