The Accents in Downton Abbey 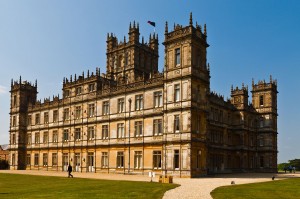 I am apparently the last person in the English-speaking world to watch Downton Abbey, but got a chance to see the first series over the past two evenings.  For the unfamiliar, the show takes place in an English country estate around the time of the First World War.  Like Mad Men, it is set in a transitional time in a country’s history (in this case, 1910’s Britain), and as such, it is interesting to see how the show deals (or doesn’t) with the dialects of its characters.

Within watching the first few minutes of the program, there is a very obvious dialect divide between the aristocracy (who speak Received Pronunciation), and the servants (who mostly speak with local Yorkshire accents).  As with Mad Men, the show’s creators seem to have made striking choices about the speech of the show’s characters, some of which (deliberately) differ from how people actually spoke in the 1910’s.

Most strikingly, the actors who play the wealthy characters eschew older varieties of ‘Upper Crust’ Received Pronunciation for slightly more contemporary varieties of RP.  For example, many of the younger actors use some glottal-reinforcement for voiceless plosives like /t/, /p/ and /k/–perfectly normal for modern ‘mainstream’ RP, but probably less so among early-20th-Century aristocrats.  Although arguably anachronistic, I think this was a wise move.  Because these characters sound more modern, I suspect the choice elicited more natural and unaffected performances from the cast.

(The one brilliant exception to this is Maggie Smith, who plays a Lady Bracknell-ish grandmother with a somewhat more patrician accent; for example, she pronounces ‘off’ as ‘orf’.  Smith’s character is of another time, of course, so the fact that her speech is different from that of her progeny is a justifiable choice.)

This is true of the actors who play the servants as well.  Most speak with Yorkshire accents (feigned or authentic), but the more inscrutable Yorkshire dialect features are not on display.  I admit I’m rather ignorant in this regard: in a country manor a century ago, would the servants have spoken traditional dialects among each other downstairs?  Or would standard English have been more typical as a type of lingua franca among staffs that would have no doubt come from a variety of backgrounds?

Perhaps the most fascinating (and ‘meta’) bit of casting in the show is Elizabeth McGovern as the youthful matriarch of the household.  McGovern plays an American who married into the British aristocracy and has lived in England for many years; fittingly, McGovern herself moved to England for marriage in the early 90’s and has lived there ever since. This results in the strange situation of an actor with an American accent tinged with British influences (listen to interviews with her on YouTube) adopting an American accent tinged with British influences … from a different time period.

All of this is to say that Downton Abbey is a fascinating show from a linguistic perspective, and I highly recommend it.  Any fans wish to comment?

(NOTE: I’m a bit busy in unrelated areas of my life this week, so I may be a bit a light in the comments section.)

Ben T. Smith launched his dialect fascination while working in theatre. He has worked as an actor, playwright, director, critic and dialect coach. Other passions include linguistics, urban development, philosophy and film.
View all posts by Ben →
This entry was posted in British English and tagged accents for actors, celebrity accents, dialects in TV, Northern English accents, Received Pronunciation (RP). Bookmark the permalink.

100 Responses to The Accents in Downton Abbey