Just what is the International Phonetic Alphabet (or IPA)?  I often use the IPA on this blog and a number of our accent training resources. You will see it used on countless other linguistics websites as well.

If you have no idea what I’m talking about, take a look at this sample:

You may have seen this kind of writing in the pronunciation section of a dictionary definition.  As you can see from the snippet above, the IPA looks like normal English writing, but with some bizarre letters thrown in.

So what is this weird “alphabet” and why is it so important when studying language?

The International Phonetic Alphabet in a Nutshell

The International Phonetic Alphabet is like any alphabet, except that, where most alphabets form the words of a language, the IPA represents the sounds of a language.  Any language, in fact:  the IPA can represent nearly any vowel or consonant made by humans.

This guide is not designed to explain every nuance of the IPA. Rather, I am going to give you the information you need to start using the IPA.  The IPA is like a language:  just as you don’t need to memorize every word in the dictionary to use English, you don’t need to know every single symbol in the IPA to starting using it.

But enough introduction. Let’s get started!

How Are Vowels Made?

Let’s do a little experiment. Make a couple of vowel sounds, like the “ah” in the word “father,” and the “eee” in the word “feet.”  Make any combination of vowels.  It doesn’t matter what they are.

You may notice something when you make these sounds. Your tongue is moving into a lot of different parts of the mouth to create them. That is because vowels are mostly created by the tongue being in a particular position.

This is a simple explanation of the process. Most people pronounce vowels using many parts of the vocal apparatus, such as the lips and the jaw. But for the time being, the tongue position is the important thing to understand. If you raise your tongue toward the roof of the mouth, you create one sound; if it’s pushed toward the front of the mouth it creates another sound, etc.

How the IPA Represents Vowels

So how does the International Phonetic Alphabet represent this tongue action? To answer this question, let’s take a look at the standard IPA chart for vowels: 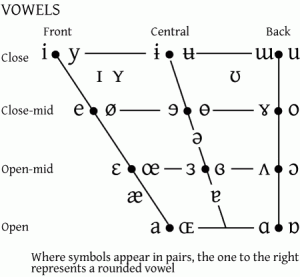 Above you’ll see large number of symbols, some of them recognizable (like i) and others which look like gobblety-gook (like ɞ). Don’t worry about what these symbols mean for now.  And don’t worry about any of the text on the chart.

What’s important about this chart is the where each symbol is placed in relation to the other symbols. The rule of thumb for this chart is as follows:

The vowel symbols on the IPA vowel chart are in the position where the tongue is placed when creating a vowel.

Let’s break this down with some examples:

But this doesn’t explain all of the symbols in the diagram, does it?

Rounded and Unrounded Vowels in the International Phonetic Alphabet

You will notice that most “positions” in the IPA chart above have two symbols next to each other. The symbol on the left is for an unrounded vowel, meaning that the lips aren’t rounded when you pronounce the sound. The symbol on the right of these positions is the rounded version, meaning the lips are rounded when you pronounce the sound.

So, from the IPA chart above, we can deduce the following:

To clarify, a rounded vowel is a vowel like the “oo” in “room,” while an unrounded vowel might be the “ee” in “fee.”  It’s pretty simple principle, really: you will notice that your lips round slightly as you make some vowel sounds, and stay unrounded while making others.

Scroll back up to the IPA chart and take a look at it.  I’ll wait down here.

You back? Good. You’ll notice on the IPA Chart that there are several vowels that do not appear in pairs. These vowels are:  /ʊ/, /ə/, /æ/ and /ɐ/.  /ʊ/ is a rounded vowel, while the rest of the “stand alone” vowels are unrounded.

The reason these vowels do not come in pairs is that no languages have been identified which have rounded vowel “phonemes” in these positions.  If what I’ve just said completely baffles you, don’t worry.  I’ll explain what “phonemes” are in a later lesson.  For now, what’s important about these vowels is that they operate in the same way the other symbols do on the IPA chart:  they represent where the tongue is place to make them.

That, more or less, is how the International Phonetic Alphabet creates vowels. Still confused?  I’ve created a handy tool so you can “cheat” your way through reading IPA vowels.  It’s a list of all the symbols of the IPA, and where they occur in English or other languages.

You can find the IPA “cheat sheet” here.

Now, click on the link to the cheat sheet above and take look at the vowel sounds.  Don’t worry about memorizing anything. This is just to get you acquainted with some of the symbols.  When you’re done, just hit the “back” button on your browser to continue our tutorial.

All done? Good.  Now let’s move on to the consonants, and Lesson Two of our International Phonetic Alphabet tutorial.