Arrr, Matey! The Origins of the Pirate Accent 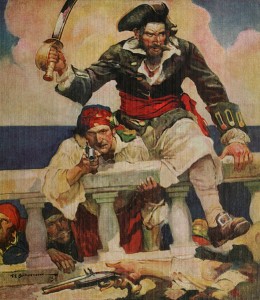 Ask people to imitate a pirate, and they instinctually adopt the “pirate accent” immortalized in film and television. This unique brogue is renowned for it’s strong “r” sound, as in “yarrr” and “arrrrr.”

Pirate imitators may wonder, “What accent am I doing? Some kinda Irish?”

The classic “pirate dialect,” in fact, is not Irish, but rather a crude imitation of the slightly similar West Country English (the dialects of Southwest England)*. Why do fictional pirates always speak in this accent? Here’s the standard explanation: During the Golden Age of Piracy, in the late seventeenth and early eighteenth centuries, many English pirates came from this region. Look up famous seadogs from the era, and you’ll find birthplaces in Bristol, Devon, and Cornwall. Mystery solved, right?

Not so fast. The golden age of piracy ended by the mid-eighteenth century. How can we collectively remember how these men spoke? And how can everyday people approximate the accent of 18th-century English pirates with such surprising verisimilitude?

I can only think of one explanation. At some point in time, some actor must have needed to play one of these pirates. Upon discovering that his pirate character was from the West Country, he decided to use the appropriate accent. And somehow this convention must have spread.

But where, and when, did this convention originate? My experience suggests the pirate brogue emerged as a dramatic staple in the 20th-Century. As a child, I was a huge fan of early pirate flicks like Treasure Island (1934) and Errol Flynn’s Captain Blood, and I don’t recall any West Country accents in those films. So perhaps it was a later phenomenon.

With this in mind, I decided to do some research on the matter. I think I may have stumbled upon a possible culprit for the Pirate accent, thanks to the website of Bonaventure, a British maritime re-enactment group:

If Disney had perhaps not cast Newton, is it possible the pirate accent would have never entered the popular consciousness?

As usual, I welcome alternate theories.

Ben T. Smith launched his dialect fascination while working in theatre. He has worked as an actor, playwright, director, critic and dialect coach. Other passions include linguistics, urban development, philosophy and film.
View all posts by Ben →
This entry was posted in British English and tagged accents for actors, dialects in film, Rhotic vs. Non-Rhotic. Bookmark the permalink.

45 Responses to Arrr, Matey! The Origins of the Pirate Accent