The 3 Types of Australian Accents 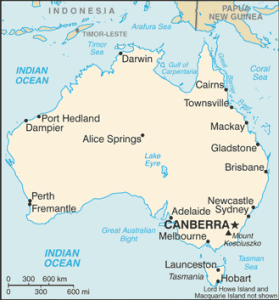 The Australian Accent is renowned for its lack of regional differences.  This is perhaps not surprising given that Britain settled the country fairly late in the history of the Empire (New South Wales was discovered over a decade after America’s Declaration of Independence).  But it isn’t quite right to say Australian Accents exhibit no variation: those differences just aren’t particularly regional.

So if Australian accents don’t really vary by region, what kind of accent differences do exist?  I’d refer you to the loose classification system developed by linguists Arthur Delbridge and A.G. Mitchell in 1965.   They separated Australian Accents into broad, general, and cultivated varieties.

Roughly speaking, General accents represent the most common type of English spoken in Australia.  Broad accents are usually described as more extreme (and associated with more working-class speech), while Cultivated Australian accents are a prestige variety somewhat closer to the British Received Pronunciation (although actual speakers of the latter are in the minority).

For a frame or reference, these corresponding celebrities might help:

1.) Broad: the late Steve Irwin.
2.) General: Australian PM Julia Gillard.
3.) Cultivated: Cate Blanchett. (Blanchett’s somewhat more “British-Sounding” accent may be a result of her being an actress, but her speech nonetheless resembles this type of elevated Australian speech).

You may disagree with my judgements here, and that’s fine.*  Australian English is clearly a continuum, and these three categories are rough markers on that continuum.  So how do we sort Australian Accents into these boxes?

A 1997 study in the Australian Journal of Linguistics** offered more precise parameters. The researchers started by making impressionistic judgements about a large number of recorded Australian subjects, placing them into the Broad, General and Cultivated categories. They then analyzed the vowel sounds of these speakers to specify which features correspond to each type of accent.

The results are not terribly surprising.  The further on the Broad end of the spectrum that an accent lies, the more markedly, well, “Australian” the features of said accent.  Here are the biggest factors:

–The diphthong in “kite,” “ride,” “mine” etc.  The more Broad the accent gets, the more this moves toward the diphthong in words like “choice” (i.e. retracted and raised).  Hence a Cultivated Australian speaker might pronounce “buy” somewhat close to an RP or General American speaker (i.e. IPA baɪ).  A Broad speaker, on the other hand, might pronounce it closer to American “boy” (i.e. IPA bɒe).

–The vowel in “mouth,” “loud” and “out,” etc.  The more Broad the accent, the more the first part of this diphthong moves toward the “e” in “dress.”  So a Cultivated speaker might have a diphthong closer to GenAm or RP (i.e. IPA aʊ), while a Broad speaker might pronounce it closer to an “eh-aw” sound (i.e. IPA ɛɔ).

If you’re already acquainted with the shibboleths of the Australian accent, none of this is particularly revealing. I was, however, struck by some interesting differences between men and women. For example, the researchers found more variation in pronunciation of the word “heard” (i.e. the NURSE vowel) among women, but significantly more variation among the word “who’d” (i.e. the GOOSE vowel) in men.  So although there are clear class differences within the Australian accents of both genders, these differences are not the same for each sex.

Still unclear to me, though, is the degree to which the Australian accent has developed regional varieties.  We’ve had past discussions about the TRAP-BATH split in Australia, which seems to be the main division between various regions in the country.  For the most part, however, I only have the vaguest of observations to offer about regional Australian accents (for example, the Melbourne accent seems slightly “clipped” to me).

In this way, Australia exhibits a paradox similar to another of the commonwealth’s largest nations, Canada.  Both countries have populations distributed over vast geographical distances, yet have startlingly few regional dialects.  What accounts for this contradiction?

*I’m mostly basing this on the degree/frequency to which each speaker retracts and raises the first vowel in words like “price,” “ride,” etc.  There’s obviously a lot of variation within the speech of individual speakers.

Ben T. Smith launched his dialect fascination while working in theatre. He has worked as an actor, playwright, director, critic and dialect coach. Other passions include linguistics, urban development, philosophy and film.
View all posts by Ben →
This entry was posted in Australian English and tagged class and accent, phonetics. Bookmark the permalink.

55 Responses to The 3 Types of Australian Accents