The 5 Best Irish Accents on Film 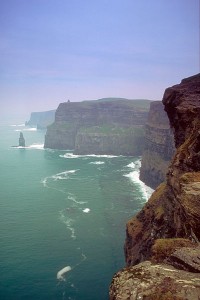 As it’s Saint Patrick’s day, there have been a number of “worst Irish Accents on film articles floating around. I like to remain relatively positive here, so instead of putting out another list eviscerating Brad Pitt and Julia Roberts, I’d like to counter these hatchet jobs with a list of the best Irish accents on film.

Its very easy to criticize actors doing Irish Accents. Ireland is an island with just over six million people, and sometimes it seems there are twice as many accents. An actor studying an Irish accent is likely to get some very unreliable feedback.

With that in mind, this is a list of my favorite Irish accents in cinema. Sometimes I single out individual actors, other times I refer to the whole movie. Some of these accents are authentic (spoken by actual locals), other times pitch-perfect simulations. But they are all great examples of the diversity of Irish speech. I’ve included some clips for your perusal.*

Filmmaker Ken Loach makes it his policy to only hire actors who are actually from the regions where he sets his films. That means the accents in this lush drama set in Civil War-era Cork are 100% authentic. It’s a great opportunity to listen to one of the most colorful, bizarre and beautiful accents of the English language.

Choice Clip: This extended trailer gives some good snippets of the Cork accent.

Many people have said this is the greatest dialect work by an actor captured on film. I can’t disagree. The accent is authentic enough that it’s perhaps the only fake accent I recommend actors listen to for research. Day-Lewis masters such precise nuances of the Belfast brogue that it boggles my mind to consider the work it took to acquire it.

Choice Clip: This tour de force scene, probably one of the greatest monologues in film.

The actors in this film are a mix of local Dubliners and actors from elsewhere, so the level of authenticity varies. But I can think of few films that capture the language of a city better. From the opening monologue (delivered by Colin Farrell in the thickest of brogues), I was hooked.

This film, about the pivotal Bloody Sunday massacre in Derry, Northern Ireland, is packed with local actors and authentic accents. One of the great things about this film is it portrays how very different the English spoken by the residents of Derry was from the British soldiers who occupied the city. The accents give an idea of how much these two groups saw each other as foreigners, and how much this contributed to the tension.

Choice Clip: This trailer has many brief snippets of the Derry accent.

I love this tearjerker of a film, about a struggling family of Irish immigrants in New York City. British actors Morton and Considine prove that subtle dialect work is often the most effective. Employing gentle Dublin accents, they never let the accents get in the way. The lesson: you don’t need to sound like a leprechaun to be recognizably Irish.

Choice Clip: Another trailer, with a lot of clips of Morton and Considine (and the two adorable little girls who play their daughters).

I admit there have been many terrible Irish accents through the years, usually by misguided American movie stars demonstrating their “versatility.” But the really great Irish accents make up for it. Little evokes the beauty of the Emerald Isle more than the speech of the place.

*My policy regarding online video clips is that I only embed videos that have been uploaded by creators or copyright holders. Since I can’t confirm the status of the clips above, I only provide links, not embedded video. If any of these links don’t work, let me know!

Ben T. Smith launched his dialect fascination while working in theatre. He has worked as an actor, playwright, director, critic and dialect coach. Other passions include linguistics, urban development, philosophy and film.
View all posts by Ben →
This entry was posted in Irish English and tagged accents for actors, dialects in film, Dublin Accents. Bookmark the permalink.

10 Responses to The 5 Best Irish Accents on Film