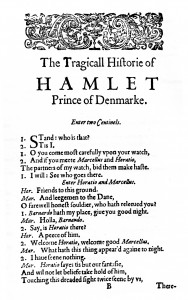 For many years, there was a “standard” accent used by Shakespearean actors. In the UK, this was Received Pronunciation (RP), the “standard British” accent you hear among Oxford professors and in Jane Austen films*. In America, classical actors used something ludicrously named “Standard American,” which is frankly just Received Pronunciation with a handful of American sounds thrown in for good measure.

For some time, people have borne the notion that “Shakespearean” acting requires actors who speak like Sir John Gielgud. This is total nonsense, of course. Yet there are still theatre critics and academics who believe the Bard should be spoken as if all his characters were guests at an Edwardian dinner party.

For example, Michael Feingold of the Village Voice (a critic I otherwise admire), had this to say about Edward Hall’s production of A Winter’s Tale a mere five years ago:

I didn’t see this production, but I’m guessing it featured royals talking in contemporary London English (or similar dialects). And frankly, I don’t see why, in this Century, we should still buy into the notion that Received Pronunciation instantly indicates royalty and prestige.

American English simply isn’t good enough for Shakespeare. This is particularly so in the Histories. What is mouthed by some of the paltry thespians in the Central Park Henry V is an insult to his honored bones. Part of the play’s beauty is in its panoply of British speech, high and low, English or Scottish or Welsh; the only varieties heard in the park are the sundry boroughs of New York.

Of course, English in Shakespeare’s day sounded almost nothing like 21st-Centuray British English, there was no “Scottish English” in the sense that we understand it now, and most people in Wales would have still spoken Welsh. But why let a little thing like history get in the way of your hatchet job?

As I’m sure Simon got a flood of angry emails from linguists in his inbox, he makes a slight retraction in a review about a year later, this time of an Edward Hall production from Chicago. Here’s his backhanded mea culpa:

I have often remarked that unmusical American English, however close to Elizabethan pronunciation, falls well short of that British melodiousness with which English actors can liltingly enhance Shakespeare.

Now, I want to clarify something. I have heard many people make the claim that “American English is closer to the language of Shakespeare than British English.” That is misleading. In reality, Elizabethan English would have been radically different from the contempoarary English spoken in both countries. Everything I have read suggests it would be most similar to Irish English, or perhaps some very strong West Country dialects. Furthermore, it had so many grammatical and syntactical features unfamiliar to contemporary English speakers that neither Brits nor Americans would have an easy time understanding your average audience member at the Globe.

That being said, you should choose to perform Shakespeare in whatever accent seems appropriate. Since the English spoken in 1600’s London is long, long gone, there is no need to cling to traditions that don’t actually come from the Bard. why bother adhering to some artificial “standard?”

*Ironically, people in Jane Austen’s day would have spoken with an accent quite a bit different from Received Pronunciation. But that’s a post for another day.

Ben T. Smith launched his dialect fascination while working in theatre. He has worked as an actor, playwright, director, critic and dialect coach. Other passions include linguistics, urban development, philosophy and film.
View all posts by Ben →
This entry was posted in Miscellaneous Accents and Dialects and tagged accents for actors, Received Pronunciation (RP), unusual accents and dialects. Bookmark the permalink.

9 Responses to Shakespearean vs. Modern English