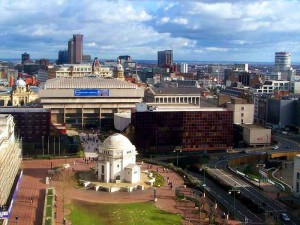 In this series, we discuss different dialects using actual video or audio samples. NOTE: This page uses the International Phonetic Alphabet (IPA). For information about this notation, please visit my page of IPA Resources.

In case you didn’t know, “Brummie” refers to the people and accent of Birmingham, England. Brits have formed an opinion about the Brummie accent over the years that is, to put it delicately, less than charitable. Adjectives along the lines of “loutish,” “thuggish,” “thievish” and a number of other pejorative “ish”es are often applied.

As an American, this attitude puzzles me. What is it about this particular dialect that irks so much of the UK? Listening to the accent myself, it sounds like one of England’s many unusual dialect pockets, with nothing more or less offensive than any other type of regional speech. It even has a pleasant lilt to it, at least in my uncouth Yankee ears.

So let’s take a look at a sample Brummie dialect, and see if there is anything intrinsically grating about it. And who better to use as a dialect sample than Geezer Butler, bassist for Birmingham’s own Black Sabbath. Take a listen:

Here are some observations about Mr. Butler’s accent:

1.) He pronounces words like “realize” and “tried” with something like IPA ɒi (so that these words sound a bit like American “realoyze” and “troyed”). This is vaguely reminiscent of how some contemporary Australian English speakers say these words.

3.) The diphthong in “about” and “house” is raised, with a prononunciation ranging from IPA æʊ to ɛʉ (“heh-oose”). This is similar to how the diphthong is pronounced in some middle-class Dublin accents.

4.) Words like “most” and “homes” are pronounced with a very low-starting diphthong, typically IPA ʌʊ although it can start even lower, making “goat” sound like “gout” to outside ears. This pronunciation sounds a bit like exaggerated Cockney.

You may notice that I’ve referenced four other dialects here. That is because Brummie tends to sound like it has been patched together from different bits and pieces of other accents. To put it crudely, it sounds a bit like somebody put Cockney, Australian, Northern English and Irish accents through a linguistic blender.

And that, perhaps, is one of the reasons why this accent is stigmatized in the UK. In some ways it can seem a bit “muddled” to outside listeners. In some sense, Birmingham isn’t just in the “Midlands” geographically, but linguistically as well.

But I’m an American. So it all sounds pretty charming to me.

Ben T. Smith launched his dialect fascination while working in theatre. He has worked as an actor, playwright, director, critic and dialect coach. Other passions include linguistics, urban development, philosophy and film.
View all posts by Ben →
This entry was posted in British English and tagged Brummie, Cockney, unusual accents and dialects. Bookmark the permalink.