The Remarkable History of “Y’all” 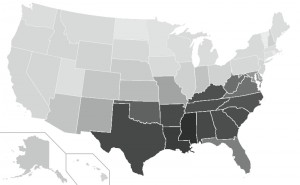 The frequency of "Y'all" usage in the United States (Wikimedia)

In contemporary New York City, it is common to hear local teenagers use the word “y’all.” A few decades ago, this word would have been confined to speakers of African American Vernacular English (AAVE), who brought the word with them from the American South. Yet nowadays, with the spread of AAVE, the word has been adopted by young New Yorkers of every ethnicity under the sun.

But where did this strange little word come from? The answer reveals a remarkable (and unlikely) story of language dispersion.

If you’re a little confused about what “y’all” means, you’re not alone. Even people who get the basic jist of “y’all” don’t grasp its grammatical purpose. The word is a “second person plural,” meaning it is a plural version of “you.” So, for example, in the American South (where “y’all” is most widespread) somebody would say:

How “y’all” got to New York City is quite obvious: at several points in the Twentieth Century, African Americans moved to northern cities like New York for industrial jobs, and brought this dialect word with them from the South. No big mystery there.

But where did “y’all” come from in the first place? A fews years back, historian David Parker explored this question on his blog. For an answer he looked to linguist Michael Montgomery:

…Montgomery claims that “y’all” goes back to the Scots-Irish phrase “ye aw,” and he offers as evidence a letter written in 1737 by an Irish immigrant in New York to a friend back home: “Now I beg of ye aw to come over here.” As I understand Montgomery’s hypothesis, “ye aw” was Americanized into “y’all,” which is indeed a contraction of “you all” but would not have come into being without the influence of the Scots-Irish phrase.

I see little reason for doubting Montgomery’s hypothesis. But I dug a little deeper to see where “ye aw” itself comes from. Turns out I didn’t need to look far: a quick Google search of “ye aw” brings up numerous examples of this phrase being used in contemporary Scots. (Scots is a language spoken in much of Scotland which derives from middle-English. It influences, but is separate from, contemporary Scottish English.) This language was brought to Northern Ireland by Scottish planters, then brought to America by “Scots-Irish” immigrants.

So if we take this evidence seriously, it looks like “y’all” followed a unique path: A phrase in the Scots language was brought to the American South by Scots-Irish immigrants primarily from Northern Ireland. The word filtered down to slaves and their descendants, and became a feature of African American Vernacular English. African Americans moved to the Northern cities and brought this word with them.

And that is the beauty of English: teenagers in the Bronx appear to use a dialect word that comes from an unique language spoken in Scotland. One word. Two continents. Three shores. Four centuries. Five separate dialects. Wow.

Ben T. Smith launched his dialect fascination while working in theatre. He has worked as an actor, playwright, director, critic and dialect coach. Other passions include linguistics, urban development, philosophy and film.
View all posts by Ben →
This entry was posted in American English and tagged American Southern Accents, dialect maps, New York Accent, y'all. Bookmark the permalink.

53 Responses to The Remarkable History of “Y’all”