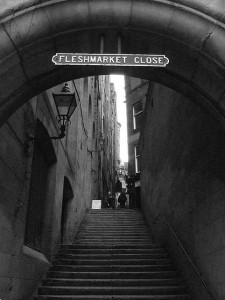 I’m reading (and enjoying) my first Inspector Rebus novel, Fleshmarket Alley, by Scottish crime writer Ian Rankin. Non-American Rebus fans may not recognize the book’s American title, as it goes by the more evocative moniker Fleshmarket Close in the UK. Why it must be spelled out this way for Americans is anyone’s guess; the context more than clarifies the term’s meaning in the book.

Alas, this is hardly the first time editors have reworked a book’s language for American readers. The Harry Potter Lexicon lists many such alterations to the series’ North American editions. The changes are especially pronounced in the early entries, but can be found throughout the series (although given that American readers bought the Trollopian later volumes in droves, I doubt the odd “crumpet” would keep fans at bay).

Some such changes to J.K. Rowling‘s oeuvre made sense (e.g. “disorientated” strikes most Americans as strange). Others induce groans among those passingly familiar with British English (“Parking lot” replaces “car park?” And for Pete’s sake, “soccer” instead of “football?”)

Then there are the ridiculous switches in the American Potter whereby overzealous editors replaced words native to American English: “lavatory” is at one point changed to “bathroom,” “sweets” becomes “candy,” and “cinema” becomes “movies.” Such finickiness recalls Ricky Gervais’ shock at the inclusion of “Shakespeare” in the British English glossary provided with the The Office‘s American DVD. (Surely we aren’t that clueless.)

For whatever good intentions such edits may spring from, they drive me crazy as a reader. Fleshmarket Alley/Close, to cite one example, makes effective use of its Edinburgh locations. So when the protagonist refers to “Edinburgh’s tenements,” for instance, is this the word Edinburghers use (it would be interesting to compare the Scottish and American definitions), or was it something else in the original? A mere Google search reveals the answer, but I’d like to feel I’m reading the author’s original words. In Rankin’s novels, so Scottish you can feel the chilly damp stinging your cheeks as your read them, the dialect and language is as much a part of the atmosphere as the fog-shrouded Firth.

I’ve long assumed this to be a recent trend, but I’ve begun to wonder how much non-American literature I’ve read that’s been tampered this way. Does anyone know the history of this kind of thing? Or other books that have been “Americanized?”

Ben T. Smith launched his dialect fascination while working in theatre. He has worked as an actor, playwright, director, critic and dialect coach. Other passions include linguistics, urban development, philosophy and film.
View all posts by Ben →
This entry was posted in Miscellaneous Accents and Dialects and tagged scottish accents, words. Bookmark the permalink.