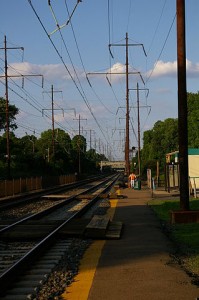 The other day, in a Philadelphia train station, I overheard a woman ask a ticket taker if a train would take her to what sounded like “Choatenham.” A moment later, I realized she had asked if the line went to Cheltenham, an inner suburb north of the city. Since many Mid-Atlantic accents feature l-vocalization, the syllables “Choat-” and “Chelt-” can sound quite similar (both close to ʧɜʊt).*

In such accents, remember, /l/ becomes something of a vowel or semi-vowel at the end of syllables. Because this vocalized /l/ is usually produced close to the velum, it tends to come off as o (as in British “paw“), w (as in “wet”), or ʊ (as in British/American “put”). In the example I’ve just mentioned, this results in “el” sounding quite close to the vowel in “go” (especially because this diphthong has a fairly front starting-point in broad Philly English).

Mine is not the first such observation. In his Accents of English, John Wells notes that around London, l-vocalization can result in the words “Paul‘s,” “pulls,” “pause,” and “pools” sounding nearly identical. In certain circumstances, it can cause tremendous confusion to outsiders.

Most intriguing to me is the way l-vocalization wreaks havoc on diphthongs. Beyond the above example, I would be little surprised if there were parts of England where “pal” and “pow” are homophones (pæʊ). A number of sociolinguists note that “dull” and “dole” may be homophones in Cockney**. And some varieties of African American and American Southern English feature a vocalized /l/ that is somewhat close to a schwa, thus rendering “feel” and “fear” strikingly similar in pronunciation.

As mentioned at the beginning of this post, particularly salient is the mid-Atlantic tendency to (almost) neutralize pairs like boat-belt, coat-Celt, and home-helm. You can’t describe this as a merger given that l-vocalization is often inconsistent. But it is a prime example of how a large-scale reordering of vowels ending in /l/ is theoretically possible.

Any other good examples of these interesting conflations?

*This seems especially case because due to “l-coloring,” the ‘e’ in “Chelt-” sounds to be somewhat retracted.

Ben T. Smith launched his dialect fascination while working in theatre. He has worked as an actor, playwright, director, critic and dialect coach. Other passions include linguistics, urban development, philosophy and film.
View all posts by Ben →
This entry was posted in American English and tagged Cockney, philadelphia accent, phonetics. Bookmark the permalink.

18 Responses to Diphthong or L?