Whatever Happened to the Northumbrian /r/? 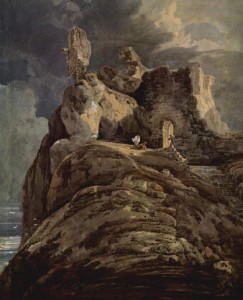 As I’ve previously discussed, English accents exhibit various types of /r/ sounds. Yet few are as peculiar as the /r/ once typical of an accent known as the Northumbrian burr, spoken in rural areas of Northeast England.

The burr was notorious for its uvular /r/ sound, similar to the /r/ in Metropolitan French or Standard German. To put that into impressionistic terms, it was a ‘swallowed’ r, pronounced from the back of the throat.

The burr is clearly audible in this old recording made for the Survey of English dialects in the 1950’s (courtesy of the British Library).

Where did this strangely ‘continental’ /r/ come from? What makes this region so unique that from its villages would emerge this most rare of English rhotics? One possible clue can be found in the history of English in the area, as summarized in this passage from a description of Middle English dialects* on the UPenns’s Linguistics Department website:

In the aftermath of the great Scandinavian invasions of the 860’s and 870’s, large numbers of Scandinavian families settled in northern and northeastern England … in some areas their settlements had so completely displaced the preexisting English settlements that they cannot have had sufficient contact with native speakers of Old English to learn the language well. They learned it badly, carrying over into their English various features of Norse…

So it seems there was a stronger-than-usual connection between the English in Northumbria and Old Norse. Those with some knowledge of Scandinavian tongues might see a possible link in that Danish and certain dialects of Swedish and Norwegian feature uvular /r/’s. But in their book Dialectology, linguists JK Chambers and Peter Trudgill posit that the uvular /r/ heard in modern Scandinavian countries actually originated in Paris, and spread from city to city in Western and Northern Europe.

So how the Scandinavian connection might have actually produced the unusual /r/ of the region is anyone’s guess. Nevertheless, it seems that the region was linguistically isolated from the beginning.

As to how the /r/ disappeared, well, that one isn’t so difficult to figure out. The ‘standard’ English alveolar approximant has conquered the traditional trills that were once part of rural English dialects. Although its memory lives on, the Northumbrian burr will most likely never reemerge.

*I’ve yet to find out who the author is of this page, as it’s buried in a largely inaccessible part of the website.

Ben T. Smith launched his dialect fascination while working in theatre. He has worked as an actor, playwright, director, critic and dialect coach. Other passions include linguistics, urban development, philosophy and film.
View all posts by Ben →
This entry was posted in British English and tagged Northern English accents, unusual accents and dialects. Bookmark the permalink.

9 Responses to Whatever Happened to the Northumbrian /r/?