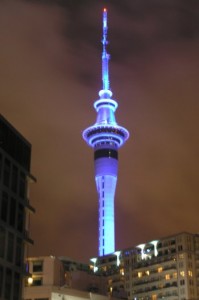 Needless to say, I was quite intrigued by this recent article at Stuff.co.nz about a new urban dialect spoken in South Auckland, New Zealand.  A unique type of youthful, urban speech has emerged, not dissimilar to Multicultural British English in terms of its cultural relevance. And curiously, these young Kiwis fully pronounce the /r/ in nurse, world, and pearl (most New Zealand accents are firmly non-rhotic, meaning they drop the r’s in these words).

Seeking corroborating evidence, I found this interview with an Auckland hip hop artist named Savage who definitely pronounces a few more /r/’s than what we think of as typically Kiwi:

Note the ‘strong’ /r/ sound in ‘first’ at :05 in the video, ‘Universal’ at :33, and a smattering of other rhotic pronunciations of ‘first’ in the second half of the interview.

Semi-rhoticity is not the only thing that marks this accent as different. Like Cockney and African American Vernacular English, there is a tendency to render ‘th’ in ‘this’ as a /d/ sound. You also may note that, as is the case with Multicultural British English, the diphthongs in ‘face’ and ‘kite’ tend to be a more ‘conservative’ (that is, the ‘i’ in ‘kite’ hasn’t shifted as much toward the ‘oy’ in ‘boy’ and the ‘a’ in ‘face’ hasn’t shifted as much toward ‘kite.’)

The original article makes a comparison that won’t make much sense to non-Kiwis: Like teenage South Auckland speech, the Southland Burr spoken on the South Island of New Zealand is rhotic. But I doubt there’s any connection between the two; it’s only in a country as ‘r-less’ as NZ that one might see a link between these two entirely different accents.

So where does the South Auckland /r/ come from? One obvious (but tired) explanation is that they pick up the sound from American media. If so, this would be one of the few places in the world where America has managed to change an accent from non-rhotic to rhotic via the airwaves. After all, Britain is far more exposed to American TV than it was 50 years ago while being a far more non-rhotic country than it was fifty years ago.

That being said, this subculture of South Auckland seems to have a stronger than average connection to American hip hop. If you watch this Savage music video, you’ll notice he raps in fairly fluent African-American Vernacular English rather than any kind of New Zealand-specific ethnolect. And notably, his pattern of rhoticity is similar to that of AAVE, with the ‘r’ in stressed syllables like ‘nurse’ pronounced, but the ‘r’ in unstressed syllables like the ‘er’ in ‘butter’ not.

Any thoughts on the origins of this new /r/?

Ben T. Smith launched his dialect fascination while working in theatre. He has worked as an actor, playwright, director, critic and dialect coach. Other passions include linguistics, urban development, philosophy and film.
View all posts by Ben →
This entry was posted in Uncategorized and tagged African American Vernacular English (AAVE), Cockney, new zealand accents, Rhotic vs. Non-Rhotic. Bookmark the permalink.

24 Responses to A New (Rhotic?) Dialect in New Zealand?