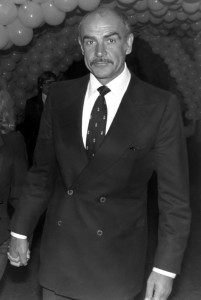 Reader Jason Reid wrote me recently with a thoughtful question about a notorious celebrity quirk of pronunciation:

Comedians often imitate Sean Connery by pronouncing /s/ like /?/ (as in she). Does Sean Connery really not make a distinction between those two sounds? I think he does. I was thinking that his pronunciation may be an apico-alveolar or even retroflex fricative as opposed to (what I think is) the more usual lamino-alveolar fricative of English. This may sound like a “sh” to people who don’t use it. What do you think? Thanks for taking the time to read this e-mail.

I agree entirely with what Jason says here. Connery’s /s/ has always struck me as unusually apical, meaning that it is pronounced with the tip of the tongue rather than the blade (i.e. top surface).  Play around with your tongue a bit while saying /s/, and you’ll notice that the tip-of-the-tongue variety indeed sounds slightly closer to English ‘sh.’ No wonder comedians have been making jokes about ‘Her Majeshty’s Shecret Shervice’ for years.

The apical /s/ is not particularly common in English, but it is typical of Iberian Castilian Spanish (the type of Spanish you would hear in Madrid), which partially results in the impression of a ‘Spanish lisp’ (although the use of /θ/ (English ‘th’) in words like cena no doubt plays a part). Incidentally, the apical/laminal /s/ distinction is important to the phonology of another Iberian language, Basque. I would hesitate to say that one influenced the other, but it’s an intriguing connection.

Laminals and apicals do in fact distinguish certain English accents, although the fact often goes unremarked upon. Not to mention that it affects other consonants more than it does /s/. In the US, the dialects of New York City and Western Pennsylvania often feature laminal /t/ and /d/ (I once identified New Yorker David Duchovny in a voiceover for a commercial primarily on the basis of his laminal /d/ in the word ‘dog.’) I’ve also heard the laminal variants in natives of London, Belfast, and Chicago. It seems to have a somewhat ‘urban’ character, although I can’t for the life of me say why.

But back to /s/. Unlike certain laminal /t/’s and /d/’s, I don’t believe Connery’s apical /s/ is part and parcel of his Scottish accent. I’ve never met anyone from Edinburgh with a similar quirk. /s/, which can vary so much in its articulation, doesn’t really factor into our perception of English accents. Yet we notice individual /s/ pronunciation very readily. Perhaps the very salience of /s/ limits the variety of /s/?

Ben T. Smith launched his dialect fascination while working in theatre. He has worked as an actor, playwright, director, critic and dialect coach. Other passions include linguistics, urban development, philosophy and film.
View all posts by Ben →
This entry was posted in English Phonetics and tagged celebrity accents, phonetics, scottish accents. Bookmark the permalink.