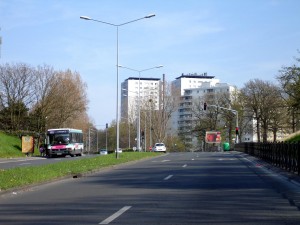 Clichy-Sous-Bois, a banlieue of Paris.

This week’s Economist features an article about the Kiezdeutsch dialect of German, mostly spoken by inner-city youth. One may recognize controversies similar to those about non-standard English: ‘purists’ argue that Kiezdeutsh is bad/lazy German, while linguists see it is a legitimate variant of the language.

The article explains the difference between the dialect and Standard German by using the phrase ‘Tomorrow I’m going to the movies’ as an example.  (I’ll summarize this here, as the original article’s explanation is a bit cursory.) In Kiezdeutsch, the phrase is …

… which literally translates as ‘Tomorrow I go movies.’  This is already a strikingly non-standard sentence, but keep in mind that in Standard German, the verb would come before ‘I.’  So the Kiezdeutsch realization equates to a hypothetical English dialect where the construction would be ‘Tomorrow go I movies.’

Throughout the English-speaking world, and beyond it, one finds similar varieties of non-standard ‘inner-city’ language. These include urban African-American Vernacular English in the US, Multicultural British English in the UK, and ‘Verlan‘ in the French Banlieu*. But what do we mean by an ‘inner-city’ dialect, exactly?

The descriptor ‘inner-city’ is admittedly problematic. The term harkens back to 1960s America, and is very much an artifact of its time and place. In the mid-to-late-20th-Century US, cities were typically blighted and low-income, yet surrounded by affluent suburbs. In non-American cities quite the opposite is often the case: In Paris the ‘inner’ city is largely wealthy while low-income neighborhoods lie on the outskirts.

‘Inner city dialect,’ then, is crude shorthand for speech common among young, urban speakers, often the children of immigrants or ethnic minorities. Such dialects differ from London’s Cockney, Montreal’s Joual, or other urban working-class dialects (although their origins may have been similar). ‘Inner city’ language is often more of a political issue, prompting a lot of handwringing from the linguistically conservative set. Here is a thinly-veiled gripe, as per the Economist article (emphasis mine*):

Kiezdeutsch is not a dialect but a style of speaking, says Helmut Glück, professor of German at the University of Bamberg. Such patois often develops among students, soldiers and other groups to foster a sense of belonging.

I don’t buy into the notion that ‘inner city’ dialects arise purely out of a desire to ‘sound different’ or ‘belong.’ (Although that may play some part.) I think it’s more a matter of children who lack ‘standard language-speaking’ parents and peers. So why the ongoing perception that non-standard language is a ‘deliberate’ choice? Perhaps because cities are by definition densely populated places.

Let me explain. If I were to travel to a remote part of Appalachia, no doubt encountering a strong regional dialect, my first thought would not be that the locals are ‘trying’ to talk differently. I would just assume that their geographical isolation offered them little exposure to English ‘norms.’ But if I were to travel to a neighborhood two miles from my house, a dialect radically different from my own might seem willfully ‘out of place.’

*A least two of these require caveats.  AAVE is only urban in the sense that a large proportion of its speakers live in cities, and ‘verlan’ is (apparently) less a dialect than a narrow set of syntactical features vaguely akin to rhyming slang.

**I’m actually a bit unclear whether these sentiments are directly attributable to Prof. Glück, as there are there are no quotation marks.

Ben T. Smith launched his dialect fascination while working in theatre. He has worked as an actor, playwright, director, critic and dialect coach. Other passions include linguistics, urban development, philosophy and film.
View all posts by Ben →
This entry was posted in Miscellaneous Accents and Dialects and tagged African American Vernacular English (AAVE), Cockney, Multicultural London English (Jafaican), unusual accents and dialects. Bookmark the permalink.