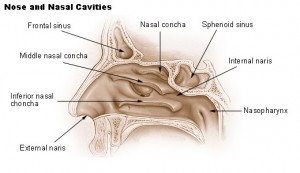 In French, the /n/ at the end of words like ‘garcon,’ ‘mon,’ and ‘Americain’ is typically  unpronounced.  Instead, the vowel before ‘n’ is nasalized, while dropping ‘n’ itself.

How does one ‘nasalize’ a vowel, exactly? It’s fairly simple. The speaker lowers the velum (soft palate), which forces air into the nasal cavity at the same time that he or she is producing the relevant a, e, i, o, or u sound.  (Children seem to do this unconsciously when they whine, to the endless irritation of their parents.)

French is not the only such language that prominently features nasal vowels, of course. Portuguese and Polish also use nasals: the ‘ao’ in São Paolo and the ‘ę’ in klębowiec are examples.  Classical Latin is believed to have used nasal vowels to replace n’s and m’s , much as French does, so there’s a quite a long history of this kind of thing in Romance languages.*

Nasal vowels are used in English as well, albeit in a much more run-of-the-mill way. They occur before nasal consonants, as in ‘man,’ ‘can‘t,’ or ‘then.’  Few of us notice this nasality, unless we’re listening very carefully, because it’s uncommon in English that nasal consonants are dropped entirely, a la French.

(It’s worth noting that in English, we don’t absolutely have to nasalize vowels before nasal consonants.  I could say ‘man’ without nasalizing the ‘a,’ although this might sound rather effete or vaguely British to American ears.)

There are some situations, even in more mainstream accents of English, where nasal vowels can entirely supercede an /n/ or /m/.  For example, many people pronounced the word ‘can’t’ without really fully articulating the /n/, and the word ’embalm’ without the /m/.  These are rather mundane observations, though.  Because the following consonant in each word is in the same place of articulation as the preceding nasal, most of us barely notice the difference between ‘can’t’ with a full-on /n/ and ‘can’t’ with only a nasal vowel.

The only examples of English I’ve encountered with anything remotely similar to French-like nasality are some varieties of African-American Vernacular English (and probably some related accents of the deep American South).  It’s possible in this small set of accents for the phrase ‘Hey, man!‘ to be pronounced without the /n/, the ‘a’ in ‘man’ being a nasalized vowel.  Hence I had a coworker from Georgia who frequently pronounced my name, Ben, without an articulated ‘n.’

But for the most part, there are few varieties of English that ‘go the French route,’ and drop nasal consonants entirely.  Are there any others that come to mind?

*When people think of Classical Latin, they usually imagine it being pronounced similarly to the Liturgical Latin of the Catholic Church.  In reality, Classical Latin, with its unstressed long vowels and nasality, would probably sound very strange to most modern ears.

Ben T. Smith launched his dialect fascination while working in theatre. He has worked as an actor, playwright, director, critic and dialect coach. Other passions include linguistics, urban development, philosophy and film.
View all posts by Ben →
This entry was posted in English Phonetics and tagged African American Vernacular English (AAVE), American Southern Accents. Bookmark the permalink.