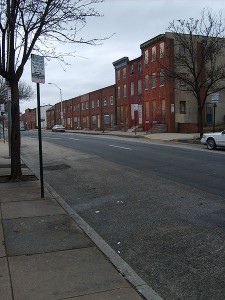 Over at Language Log, Eric Bakovic has an interesting take on accent work in films and television. The first half of the piece discusses accents on the The Wire, one of the most linguistically fascinating series in the history of television (Thanks to Nancy Friedman for pointing the article out to me).

Although I understand that many folks familiar with Baltimore-area speech could somewhat reliably distinguish the Baltimore-native actors from others, there were probably very few who would have picked out West as British or even as not American (or Idris Elba for that matter, another Brit who played Russell “Stringer” Bell on the show). These folks are actors, after all — really good ones who do what it takes to play their characters as authentically as possible, speech and all.

I have to second Bakovic on this point. I may have had my minor quibbles with Dominic West‘s accent in the first season of the series, but as a whole, The Wire is perhaps the most impressive body of dialect work I’ve  seen in film or television.

And I really do mean dialect work, with a capital ‘d.’ The language of the show was far more impressive than the mere fact of British actors playing Americans. The dialogue was bursting with unique syntax, morphology, and slang. Each episode’s unique blend of African American Vernacular English, Baltimorese and various professional jargons was part of what earned the show such a rabid following (even if the dialogue was sometimes so thick it strained comprehensibility).

And about those jargons: what I found particularly remarkable about The Wire was the way it treated the lingo of police, drug dealers, union men, and politicians as part of the same problem. Whether drug lord Stringer Bell talked about killing someone or a police chief discussed a case of police brutality, both men used highly codified forms of language as a way of softening the horror of the situation. Much like the “business English” recently discussed on the Macmillan Dictionary Blog, language in The Wire was often used to sugarcoat cruelty and violence.

Any fans of the series out there wish to comment?

Ben T. Smith launched his dialect fascination while working in theatre. He has worked as an actor, playwright, director, critic and dialect coach. Other passions include linguistics, urban development, philosophy and film.
View all posts by Ben →
This entry was posted in American English and tagged dialects in TV. Bookmark the permalink.

18 Responses to Language Log on the Accents in “The Wire”