Is the Glasgow Accent Being “Cockneyfied?” 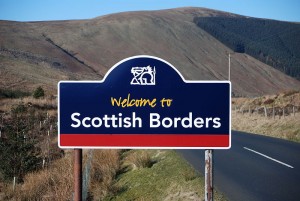 I’ve often discussed Estuary English, the London-influenced accent spreading throughout England. One piece of evidence?  Young people in Glasgow seem to be adopting ‘Cockney’ pronunciations. If the Glasgow accent is indeed becoming more ‘Southeastern,’ this would be a powerful indicator of London’s linguistic dominance.  After all, if kids as far-flung as Scotland talk like Londoners, Estuary must be colonizing Britain!

The “Cockney in Glasgow” theory is summarized by this dubious Wikipedia entry:

Studies have indicated that working-class adolescents in areas such as Glasgow have begun to use certain aspects of Cockney and other Anglicisms in their speech … Researches [sic] suggest the use of English speech characteristics is likely the influence of London and South East England accents featuring heavily on television.

I have some qualms about the above paragraph (of the 9 links cited, only 1 is a “study”). But taking these claims at face value: Is the Glasgow accent really becoming more like Cockney? Or are these changes mere coincidence?

Let’s look at the three “Estuary” features found in Glasgow:

—Non-rhoticity: That is, some younger Glaswegians drop the ‘r’ at the end of words like car, butter, and core.

—L-vocalization: Like Cockneys, some younger Glaswegians turn the ‘l’ at the end of syllables into different types of ‘w’- or ‘oo’-like sounds. So battle might sound like “battow” or “battoo.”

To give you an idea of what a contemporary, adolescent Glasgow accent sounds like, I refer you to this video, which I posted a few months back:*

I have several reservations about the “Glasgow Cockney” theory.  First off, as per the video, Glasgow ‘r-dropping’ is different from London ‘r-dropping.’ The young man interviewed exhibits a kind of ‘swallowed r’ (for you phoneticians, that would be ‘a pharyngealized r’).* That’s unlike London, where the ‘r’ entirely disappears after vowels.

I find the other features of Glasgow “Cockneyfication” even less convincing. In the US, /th/-fronting (i.e. ‘both’ = ‘bof’) and l-vocalization (‘trouble’ = ‘trubbow’) go hand in hand in several accents or dialects: African American Vernacular English, Mid-Atlantic (Philadelphia/Baltimore) English, and some varieties of Southern English. I don’t believe Cockney has influenced any of those accents.  Why Glasgow?

And what about geography? Why do these features skip past Northern England to land feet first in Scotland? Our overexcited Wikipedian’s answer is ‘the media,’ that vague linguistic bogeyman (bogeymen?) blamed for the English talking like Americans; everybody in the British Isles talking like Londoners; public school students talking like Cockneys; and x ethnicity talking like y ethnicity.  More evidence is needed.

Joking aside, I won’t completely reject the notion that hours of EastEnders has led Scottish teenagers to drop their r’s. I just need more convincing. After hearing countless permutations of the complaint, “the young people talk funny because of the TV,” I’m become wary of such assumptions.

*Don’t mean to imply anything about Glasgow or the Glasgow accent by posting this. Alas, it’s a really good accent sample!

Ben T. Smith launched his dialect fascination while working in theatre. He has worked as an actor, playwright, director, critic and dialect coach. Other passions include linguistics, urban development, philosophy and film.
View all posts by Ben →
This entry was posted in British English and tagged Cockney, Estuary English, Rhotic vs. Non-Rhotic, scottish accents. Bookmark the permalink.

35 Responses to Is the Glasgow Accent Being “Cockneyfied?”