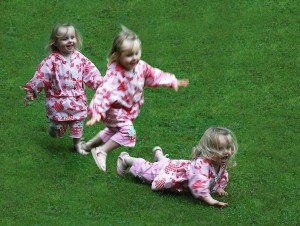 Children’s accents tell us quite a bit about adult accents. From the speech of children, we can deduce which sounds of English are easily acquired and which less so.  And in some situations, we can find explanations for why accents lose certain features while preserving others.

I pondered all this while reading an article from Edinburgh’s Queen Margaret University titled Acquisition of Scottish English Phonology: an overview.* The paper cites a study of young Scottish children’s speech, noting a distinct pattern for the ages by which kids master English consonants:**

–The consonant in lot is fully mastered between 4 1/2 and 5.

–The consonants in sing, zap, shop, and leisure  are fully mastered between 5 1/2 and 6.

–The consonants in choose, juice and ring are mastered after age 6.

These results aren’t entirely surprising. Young children’s trouble with /r/ and /l/ is oft-observed (hence pronunciations like “wabbit” and “twubbow” for rabbit and trouble). I was unaware the “ch” in chocolate and the “j” in juice posed so much trouble for youngsters, but it makes a lot of sense when you consider the complexity of those affricates.

But (paradoxically?), even the youngest of Scottish children seem capable of learning nuances of the Scottish English vowel system. A feature of Scottish accents that I assumed to be fairly complex–the Scottish Vowel Lengthening rule–is mastered from a very early age (before 3 1/2). So while it can take a while for children to conquer some of English’s most salient features (/r/ and /l/ for example), they nevertheless pick up some of their accent’s subtlest distinctions shortly after the onset of speech.

This got me thinking from a dialect coach’s perspective.  It would be an interesting challenge to construct an age-specific accent for an adult actor playing a young child (a not uncommon situation). As the article suggests, this would require exceptional specificity. A three-year-old speaker has a very different accent compared to a five-year-old!

**For clarity, I use the term “fully mastered.”  This isn’t exactly what the paper suggests, however.  It actually describes the ages at which 90% or more of the subject group exhibit complete mastery.  I’ve also (again for clarity) rounded up numbers such as 4 years, 11 months.

Ben T. Smith launched his dialect fascination while working in theatre. He has worked as an actor, playwright, director, critic and dialect coach. Other passions include linguistics, urban development, philosophy and film.
View all posts by Ben →
This entry was posted in English Phonetics and tagged phonetics, scottish accents, speech pathology. Bookmark the permalink.