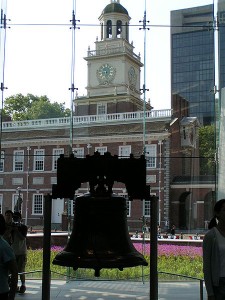 I should really know more about the Philadelphia Accent than I do. I have several friends who live in Philadelphia, my lovely girlfriend was born in the city (and raised nearby), and I’ve lived most of my life in the Northeastern United States. But it wasn’t until very recently that I could so much as identify a Philadelphia accent.

So what does English sound like in the city of Brotherly Love? Reports vary. It’s been described (only semi-accurately) as “the New York accent, only milder.” More on-point, it’s part of a small dialect area called the Mid-Atlantic, which stretches from Southern New Jersey to Coastal Maryland.

Given the city’s geographical location, the actual features of the Philadelphia accent seem to borrow from both North and South:

*Like New York City Accents, Philadelphia English features a raised pronunciation of words like thought and coffee (“kaw-fee” or IPA kɔəfi). Also like Big Apple natives, Philadelphians have a complex system called the tense-lax split, whereby the /a/ in certain “short-a” words–such as bad, path, pan, and ask–is pronounced  more “tensely” (impressionistically speaking, this means that “bad” may sound a bit like “bed.”).

*But like some American Southern accents,  the vowels in GOOSE and GOAT are fronted (pronounced closer to the center of the vowel space — i.e. IPA gʉs and gɜʊt).

But there are other aspects of Philly speech that are quite unique. For example, the /ey/ sound in the words face and the /ey/ in the word day are not pronounced alike. When this diphthong occurs in closed syllables (i.e. before a consonant, as in “face”), this sound becomes an “eh” (i.e. IPA fe:s). When the sound occurs before an open consonant (as in “day”), it is slightly closer to the sound in “die” (i.e. IPA dæɪ).

Examples of true-blue Philadelphia accents are few and far between. Probably the most famous person with a marked accent would be television commentator Chris Matthews:

I’d also point to these two excellent samples on the International Dialect of English Achive: this middle-aged speaker and this younger speaker.

Like New York, though, there are apparent sub-dialects in Philadelphia. For example, I’ve heard rumor of a “South Philly” variant which differs from other Philadelphia accents in that it is non-rhotic (i.e. the ‘r’ is dropped at the end of words like butter or car).

Alas, I couldn’t find a clip of anyone identified as being from South Philadelphia, so I went with an interview with local celebrity/cheesesteak entrepreneur Joey Vento, of South Philly’s Geno’s Steaks fame. (Disclaimer: Vento is an extremely controversial figure in Philadelphia, as will become apparent from this clip. He does not represent the fine city of Philadelphia, nor the political views and/or dietary habits of its populace):

I had a hard time tracking down a bio of Mr. Vento, although one site I visisted suggested he’s from West Philly, not South. Nevertheless, as an Italian-American he is of the demographic that apparently maintains the “South Philly” ethnolect. Indeed, I noticed two non-rhotic pronunciations: his repetition of “dollars” at 0:51 (“dolluhs”) and his pronunciation of “opportunities” at 3:03 (“oppahtunities”).

I’m not sure, though, why such non-rhoticisms may (or may not) linger in the speech of Italian-Philadelphians. Perhaps there was a stopover in New York City before this group settled in Philly?

Ben T. Smith launched his dialect fascination while working in theatre. He has worked as an actor, playwright, director, critic and dialect coach. Other passions include linguistics, urban development, philosophy and film.
View all posts by Ben →
This entry was posted in American English and tagged New York Accent, philadelphia accent, Rhotic vs. Non-Rhotic. Bookmark the permalink.

52 Responses to The Overlooked Philadelphia Accent