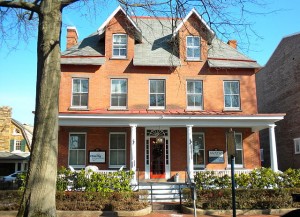 [This is my second post on the non-rhotic accent once spoken by the Northeastern US Elite. My first post on the subject, about Eleanor Roosevelt’s accent, can be found here.

West Chester is an town in Eastern Pennsylvania with a beautiful mix of Georgian, Victorian and Edwardian architecture. One of its most famous native sons is Samuel Barber, renowned for his Adagio for Strings. (You’d recognize his Adagio as the sad music from Platoon, the 9/11 Memorial, and The Elephant Man). Curious about Barber’s life story, I located a series of 1949 interviews with him on NPR’s website.

You get a particularly good sense of how Barber spoke in this interview. His accent does not, to say the least, resemble contemporary Philadelphia English. Entirely non-rhotic, with the TRAP-BATH split throughout, this is clearly “non-local” speech. Barber has some relatives from Boston, which might offer a partial explanation, but keep in mind he spent his entire childhood and adolescence in the Philadelphia area.

Located 17 miles west of the City of Brotherly Love, West Chester is in an area that generations ago was a major branch of the Northeastern US elite (America’s “aristocracy sans monarch,” if you will). So it’s possible Barber’s lect is an example of the RP-like accent once heard in parts of the affluent East Coast (and in some cases beyond).

But even so, Barber’s accent was probably atypical. For instance, contrast Barber with this video of another West Chester native, General Smedley Butler. Butler was born nearly three decades before Barber, was from a comparable upper-class background and yet spoke with an accent close to contemporary General American English.

This is perhaps another reason why this type of “American Queen’s English” never caught on as widely as its British counterpart; it was too inconsistent. If you grew up in a wealthy household in England in the Edwardian era and attended elite schools, it is very likely you would speak with a predictable accent.

I can’t dismiss the idea that Barber’s accent was perhaps affect. But it nevertheless suggests the remnants of a linguistic trend that might have taken root had demographics and history gone in a different direction.

*Eliot came from a prestigious New England family, so it’s hardly surprising he didn’t talk like a Midwesterner.

Ben T. Smith launched his dialect fascination while working in theatre. He has worked as an actor, playwright, director, critic and dialect coach. Other passions include linguistics, urban development, philosophy and film.
View all posts by Ben →
This entry was posted in American English and tagged celebrity accents, philadelphia accent, Received Pronunciation (RP). Bookmark the permalink.