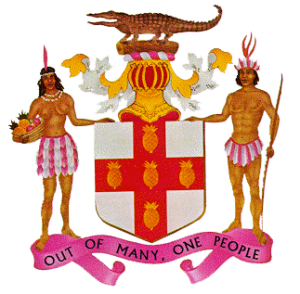 I’ve recently become fascinated with Jamaican Patois, the creole language spoken on the island of the same name.  The language derives from African languages and various dialects of the British Isles spoken in the 17th-Century.  So it offers insight into both the origin of creole languages and the features of Early Modern English.

A few months back, I posted this “Jamaican Patois Night Before Christmas,” an excellent introduction to what this unique language sounds like.  Take a listen.

Jamaican Patois is too broad a topic for one blog post, so I’ll focus on an aspect of the language I find particularly interesting:  weak vowels.  Also termed “unstressed” or (with a slightly different meaning) “reduced,” these are vowels such as the “a” in afraid, the “a” in comma, or the “e” in pocket. Such syllables get less emphasis in most accents of English.

But as with many creoles, Jamaican Patois has a more interesting array of such vowel sounds than Standard English does. Where Americans and Brits uses a schwa sound, Patois assigns these unstressed syllables to an a, e, i, o or u sound depending on the context.*  And it’s not predictable from standard English spelling which of these is assigned to which vowel.

Take, for example, the name of the country itself, Jamaica. One might expect that the “a” in the first syllable would correspond to an /a/ sound. In fact, the broad Patois realization is Jumieka (IPA ʤʊmiɛka), with a clear /u/ for the “Ja-.”**

Then there are “-ion” words like nation, organization, and million, which one might expect to have an /-o/ type sound in the last syllable. Instead, these have an /a/:  million = milian (IPA mɪljan); separation = separieshan (IPA sɛpaɹiɛʃan). (Fans of 1980s one-hit wonders will remember this type of pronunciation from the opening stanza of “Pass the Dutchie.”)

On jumieka.com, an excellent resource for learning Jamaican Patois, an interesting distribution of unstressed vowels can be found in the introduction on the homepage (I’ll meet you guys at the bottom of this list):

Obviously, I’m working off a single text here, so it’s hard to come to conclusions.  It’s also important to note that “Jamaican Patois” may be applied to less extreme varieties of the language that use different pronunciations. But there are some interesting things to be gleaned. First of all, note that /a/ and /i/ are used as weak vowels a good deal, while /e/, /o/ and /u/ much less so.  So /a/ and /i/ may serve purposes similar to the constrasting types of schwa used in British/American rosa‘s and roses, respectively.

But note the contradictions:

As a total Jamaican Patois novice, I would be way over my head trying to analyze what this means. But I’m guessing there’s a division here between words that are learned early in life (e.g. “Jamaican”) and those learned later (like “cadence” mentioned above). In a language that is in some ways a type of English, which words can be considered “natively” Jamaican? And which can be considered “loans?

*HUGE caveat here. Some scholars hypothesize that Jamaican Patois does not have stress in the same sense that non-creole English does, but rather is a tonal or pitch-accent language. So really, what I’m talking about here are syllables that correspond to unstressed syllables in more “standard” types of English.

**Jumieka.com has an interesting chart in which it shows how this word is spoken on different points in the continuum from broad Jamaican Patois to standard Jamaican English. It goes from “Jumieka” to “Jomieka” to “Jamieka.”

Ben T. Smith launched his dialect fascination while working in theatre. He has worked as an actor, playwright, director, critic and dialect coach. Other passions include linguistics, urban development, philosophy and film.
View all posts by Ben →
This entry was posted in Miscellaneous Accents and Dialects and tagged carribean accents and dialects, creoles, English schwa. Bookmark the permalink.