Far Out: The Hippie Dialect 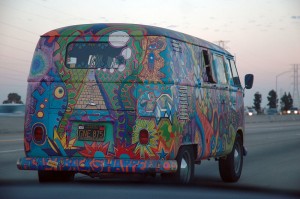 The etymology of dialect words is an obsession for English language enthusiasts. And thanks to Google NGram, Google Books, Google Scholar and other Google-related tools, it’s never been easier for laymen to research the origins of slang. But the question of when (and how) dialect words disappear from the lexicon remains a difficult question to answer.

Which brings me to today’s topic, the lingo of the countercultural movement of the 1960’s and early 1970’s. Linked to the Baby Boomers (the generation born in the decades after World War II), these types of words briefly flourished during the Vietnam era. Today, however, many such words are non-existent in the lexicon of contemporary American dialects. What happened?

I would define the countercultural era (so to speak) as being between 1966-1974, since that’s when the bulk of “classic boomers” (born 1943-1957) were of college age. One of the great generational shifts in American history, the period was marked by young people eschewing the corporate mindset of their parents in favor of a culture of relaxed mores and lifestyles.  It’s not surprising that this period was also associated with tremendous change in the American dialect.

The slang of this period is well-known, symptomatic of what might be called “hippie English.”  A small sample:

cat: a colloquial term for “man”
dig: verb, meaning “to understand”
far out: along the lines of  “awesome” or “cool” in contemporary American dialects
groovy: also along the lines of  “awesome” or “cool”in contemporary American dialects
mama: term of endearment applied to female significant other
grass: marijuana
foxy: sexually attractive (usually applied to women, but occasionally men as well)
ball: verb, meaning to have sex with

These terms have a variety of etymologies. Many (such as “cat” or “dig”) started within the lexicon of the dialect known as African American Vernacular English (“dig” is hypothesized to derive from Wolof). Other words seem to hark back to the beatnik era in the 1950’s. But all of these have become extremely old hat, at least in America.

So why did these dialect words (“hippie” or “boomer” lingo) become so passe? There are two possible answers:

1.) The children of baby boomers disassociated themselves from their parents. People of my generation (Gen Y) and the generation before it (Gen X) have something of a cynical attitude toward the generation of our parents, and probably the accompanying “dialect.”  It’s easy to see how we may have sought to wipe all traces of the countercultural excess from our vocabularies.

2.) Baby boomers THEMSELVES disassociated from the countercultural movement. When my parents use phrases such as “far out,” “groovy” or “can you dig?” it is usually in a spirit of contemptuous mockery. Many people of this generation have actively distanced themselves from the terminology associated with the drug scene of the late 60’s.

I think a bit of both factors came into play. The boomers notoriously became more conservative in the Reagan/Thatcher era, so it’s not surprising that they wanted to get as far away from the era of free love and communes as possible. At the same time, later generations became disillusioned with the irresponsibility and delusion associated with the ’60s and ’70s.

Ben T. Smith launched his dialect fascination while working in theatre. He has worked as an actor, playwright, director, critic and dialect coach. Other passions include linguistics, urban development, philosophy and film.
View all posts by Ben →
This entry was posted in American English and tagged unusual accents and dialects. Bookmark the permalink.

18 Responses to Far Out: The Hippie Dialect