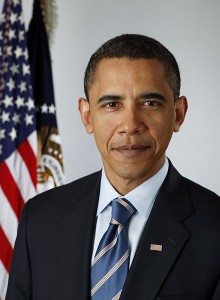 This post is four years late. I admit it. The president’s accent has already been scrutinized ad nauseum, and there have been political controversies about this very topic. But after watching a speech by Obama this morning, and finding his accent intruiging, I decided to offer my take.

Debating presidential accents is nothing new. Who can forget the way America greeted JFK‘s odd variant of New England, or the questions posed about the authenticity of George W. Bush‘s Texas twang. Presidents seem to have unusually malleable accents, and our current president is no different. With that in mind, here is Obama’s official take on the matter, in his own words, from an interview in 2008:

My father was from Kenya so I’ve got an Arab-sounding name, and I think most people know that I was raised by my mom who was from Kansas, which is why I’ve got a Kansas-sounding accent…

I’m not quite sure I’d agree with that statement. But let’s examine some clips. Here is a recent speech Obama posted on his YouTube channel:

Of the places Obama grew up in or was shaped by, Chicago actually sticks out the most for me. He slightly raises and tenses the “a” in words like “last” and “that,” with perhaps the most marked Great Lakes-type pronunciation of this vowel being the “pull back” (“pull behk“) you find at 0:55. The Chicago-ness (albeit mild) of Obama’s speech may strike one as peculiar (he didn’t move there until he was nearly in his mid-twenties), but the city had a profound impact on his life, so I’m not surprised he has a touch of the local accent.

I don’t quite see the Kansas connection, though, save maybe a hint of a twang here or there*. Not to mention that, to put it crudely, a “Kansas accent” isn’t a thing. Renowned linguist William Labov identifies at least two accents in the state, as does the Nationwide Speech Project, and linguist/dialect hobbyist Rick Aschmann identifies a whopping 4-5 accents in Kansas, depending on the accent boundaries you’re referencing.

What I can say is that Obama’s maternal relatives were mostly from southern part of the state. Labov identifies that area as speaking with a South Midland accent, a region which tends to blend Southern and Northern features. Taking this into consideration, let’s see if we can find a bit more “Southern Kansas” in Obama’s speech when he is addressing a crowd in the very same region:

I’d tentatively say there’s a bit more twang in his accent here, and perhaps a slightly increased tendency toward glide deletion. But I don’t hear that much of a difference. It’s worth noting, however, that he is talking to democratic voters in a Red State. Since his audience is a group of people who probably disassociate themselves from the surrounding political environment, slipping into a local accent may hurt Obama more than it helps him. Although I couldn’t say for sure.

This post wouldn’t be complete without addressing the elephant in the room: the president’s relationship with African American Vernacular English. To give you an idea of the criticism the President has endured over this issue, I direct you to this inexcusable comment from Camille Paglia in 2008 of the otherwise excellent Salon.com:

A major gaffe this summer has been that, in trying to act more casual and folksy to appeal to working-class white voters, Obama has resorted to a cringe-making use of inner-city black intonations and jokey phrasings — exactly the wrong tactic.

I think this paragraph is cringe-making.

For reference, this is a clip of the kind of situation that caused this hubbub:

While I don’t agree with Paglia’s conclusions (or terminology), I will concede that Obama adopts some AAVE features here: his rhoticity (final r) is weaker than normal at many points, and he more frequently falls into AAVE prosodic patterns (specifically a tendency toward high tone at the beginning of sentences**, although I’ve heard him do this in other speeches as well).

There is also a fascinating and complex moment that occurs at approximately 2:55 in the video. Obama starts off a sentence with “Most of us was …” then, after a tiny pause, corrects the “was” to “were.” “Most of us was…” is a perfectly valid construction in AAVE, even if it isn’t part of standard English. When Obama corrects himself from the former to the latter, what is going on in his head? I don’t want to speculate as to why Obama checks himself there, but find it very interesting that he did.

In any case, it’s clear that Obama made a deliberate choice to adopt some of the presumable dialect features of the crowd he was addressing. Whether or not I agree with this choice is not something I’m comfortable deciding. But I’d point out that our president is not the first politician to switch up his speech, and I doubt he will be the last (see such cases as Clinton, Hillary; Blair, Tony; or Kennedies, Most).

Presidents are a unique breed. They are often seeking, rootless people. Obama was raised by Kansans in Hawai’i and Indonesia. George W. Bush was raised by a New Englander and a New Yorker in Texas. JFK, while associated with Eastern Massachusetts, spent various part of his upbringing in the Bronx, Westchester County and Connecticut. Presidents typically have strange relationships to their roots and regional identities.

*For the more phonetically-inclined, my specific objection here is that Obama’s GOAT and GOOSE sets are too conservative–citing Labov once again, their fronting is a pretty important marker of South Midland speech.

**This feature of AAVE was given academic credence by linguists Sun-Ah Jun and Christina Foreman in a 1996 study of African Americans in Los Angeles. However, you can hear this feature in one of the most famous sentences in human history, Martin Luther King’s “I had a dream…” Dr. King hits the first two words very strongly “I HAD a dream,” whereas General American English would put most of the emphasis on the final word. I think that this prosodic feature is part of what gives the speech its spine-tingling power: King isn’t passively talking about a dream he had the other night, but telling us that he emphatically, actively dreams of a better future.