“Rod” or “Ride?” Glide Deletion in the American South 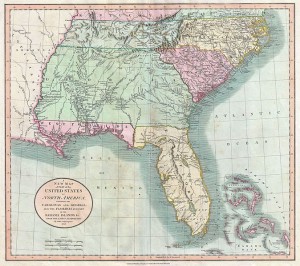 When my mother was a teenager, she spent a summer in Scotland. Since she was staying as a guest in a family’s home, she shared a telephone with the other residents. In jest, a Scottish friend of hers often answered the phone and, imitating my mother’s accent, said“Hah! This is Nancy!“

The “hah” in that exclamation is not a laugh, but rather the word “Hi!” rendered in American Southern English. My mother is from Kentucky, you see. Kentucky, like much of American South, is glide deletion country.*

If you’re confused as to what I mean by glide deletion, here are several videos of speakers from the American South. You only need to watch about a minute or so of each. The important thing is to listen to words like time, ride and kite.

As you can see, time, ride and kite tend to sound like “tahm,” “rahd” and “kaht” (IPA ta:m, ra:d, ka:t). This vowel sound, which is more typically a diphthong in other dialects (a combination of two vowels) is instead a monophthong (one vowel).

In the United States, this feature mostly occurs in the South.  However, it strays a bit further to the north or the west in some cases, and can be heard in pockets of (from West to East) Arizona, New Mexico, Southern Colorado, Southern Kansas, Oklahoma, Southern Missouri, Southern Illinois, and western Maryland.

I recently got into a conversation with commenter ‘enry ‘iggins about where some of the features of American Southern English may have come from. We briefly touched on the topic of glide deletion and what its origins may be. I see there being three possible explanations for how “glide deletion” arose:

1.) It came from Northern England. My history is a bit shaky, but I’ve read that there was a decent amount of immigration to the South from this region of England in the colonial era. Northern England, to this day, features glide deletion as a feature in many dialects (although it’s less pronounced in some areas).

2.) The Scots-Irish. This was probably the most important group to immigrate to the south. They were, generally speaking, Ulster Scots from Northern Ireland. Notably, there is a similar tendency to lengthen the diphthong in words like “ride” in some modern Northern Irish Accents that is slightly reminiscent of the US Southern pronunciation.

3.) The Southern Vowel Shift. It’s also possible that glide deletion is the product of something called the Southern Vowel Shift (You can find details about what this means here). Basically, most of the vowels in Southern English seem to have shifted into different positions than most American accents, and this may have indirectly forced the “ride” diphthong to become a monopthong (I’m not clear on the details of how).

Or it may be a bit of all three explanations. These different factors may have reinforced each other in some way and led to the current pronunciation of ride as “rahd.” Since we don’t have recordings of Scots-Irish farmers from the 17th-Century, however, we’ll never know for sure.

What I wonder is why this feature is so widespread in the American South. Outside of a few areas with a lot of Northern transplants (Florida, Atlanta, the major Texas cities), glide deletion is virtually everywhere South of the Mason-Dixon line. Yet it’s fairly rare elsewhere, outside of pockets of Northern England and in South African Accents. Why does this one accent feature seem to be concentrated so heavily in one large region?

*My mother has lived in New England for nearly thiry years at this point, so she really doesn’t have this feature anymore.

23 Responses to “Rod” or “Ride?” Glide Deletion in the American South