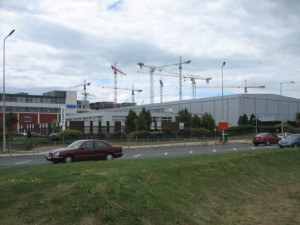 Dublin under construction during the economic boom (Wikimedia)

I spent Friday night at a gala for the organization my girlfriend works for, a community center created for (and largely run by) Irish immigrants.  As always, it was an accent tour of the Emerald Isle, as folks from Dublin, Belfast, Galway, Donegal and countless other regions gathered under one roof.

At one point of the evening I struck up a conversation with a young woman from Cork, a part of the country noted for its unusual accent.  This woman, however, had nothing resembling this dialect.  Rather, she spoke with what linguist Raymond Hickey terms Supraregional Irish English.  It’s definitely an Irish brogue, but greatly softens the more pronounced regionalisms.

You can hear something of this dialect in this video, in the interviews with RTE personalities Grainne Seoige and Ryan Tubridy (he starts speaking at 1:10):

You can also find quite a few samples of this accent in this trailer for the Irish romantic comedy, Speed Dating (particularly listen to the speech of the young protagonist):

Another prominent “SIE” speaker, I would argue, is actor Jonathan Rhys Meyers (also from Cork):

All these people are clearly Irish, of course.  And yet there are some things are a bit different.  The “ar” in start isn’t as fronted or raised as in more pronounced accents (in working-class Dublin accents, star sounds very much like “stair”).  The dipthongs in kite and mouth are much closer to how they are pronounced in standard British or American accents.  And there is no hint of the “Irish r” you find in stronger accents (IPA ɾʷ).

This “neutral accent” seems to be a younger phenomenon.  As I’ve mentioned here before, I’ve heard a number of older people who have been surprised, aghast even, at how quickly SIE has replaced local dialects among people under 40.  As such, it’s natural to wonder how much the Celtic Tiger, Ireland’s massive economic expansion in the 90s and 00s has played a part in this.

As the world now surveys the damage that Ireland’s economic exuberance wreaked upon the country, I can’t help but wonder how much this damage extended to Ireland’s linguistic diversity.  Was the island where “each village has its own voice” homogenized by the era of cell phones and Galway summer homes?

Ben T. Smith launched his dialect fascination while working in theatre. He has worked as an actor, playwright, director, critic and dialect coach. Other passions include linguistics, urban development, philosophy and film.
View all posts by Ben →
This entry was posted in Irish English and tagged Dublin Accents. Bookmark the permalink.