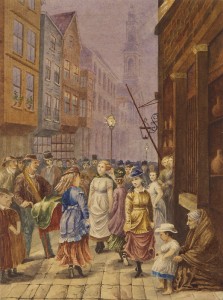 The Strand, London, in the 19th Century

I’ve lived in New York City for thirteen years.  In that time, I’ve learned that living in such an intense urban area has a palpable effect on how one communicates.  You have to talk faster, talk louder, talk more frequently, and communicate with a incredible variety of humankind.

It would be natural to assume, therefore, that certain features are common to all urban accents and dialects.  Now I personally think that’s a bit of a leap (I don’t see a lot of overlap between the Big Apple and Toronto).  However, there is one sound in the English language that, in city after city, seems to undergo some kind of noticeable change:  the th sound in words like mouth and this.

In Standard English, th is pronounced as a voiceless or voiced dental fricative (IPA θ or ð), meaning it is made with the tip of the tongue touching the top row of teeth.  But in many cities, typically very large ones, there is a noticeable tendency for this sound to go a bit off the rails:

–In the accents of New York City, Chicago, and Philadelphia, among many other American cities, this becomes a dentalized ‘d‘ or ‘t‘ sound.  Hence the famous (albeit inaccurate) caricature of New Yorker’s pronouncing 33rd Street as ‘toydy toyd shtreet.’

Obviously, not all cities have this funny business with th.  But there are enough instances of this happening that I see a slight correlation between urban areas and accents with non-standard th pronunciations.

What accounts for this?  The most obvious explanation is that all of these cities have been subject to quite a bit of immigration.  Since standard English th (θ or ð) exists in few languages, many people who speak English as a second language use alternate pronunciations.  And this may have filtered down into the speech of native English speakers.

An even simpler explanation may be at play, though: th is frankly a cumbersome sound.  I’ve been speaking English for my entire life, and I still occasionally stumble over this consonant.  There is a reason young children have no problem pronouncing ‘m‘ in mama, but tend to say ‘mouf’ when they mean mouth. Linguists will send me hate mail for saying this, but I find something inherently unnatural and awkward about English th.

Now introduce this phoneme to a fast-paced urban environment, where you need to get a lot of information across quickly, and it’s not surprising that many ‘city accents’ skew this fricative a bit.

Since this sound can be easily replaced in many accents of English, then, I wonder what the future is for English th.  As we can see with the urban dialects above, other pronunciations can easily compete with (and beat) little old th. Will this sound survive another hundred years?  Or will non-standard pronunciations make it one more victim of English’s millenia-long process of simplification?

*This is different from the dentalized t and d that you hear for ‘th’ in other Irish accents.  In local Dublin speech, ‘math’ and ‘mat’ are pronounced almost identically.

Ben T. Smith launched his dialect fascination while working in theatre. He has worked as an actor, playwright, director, critic and dialect coach. Other passions include linguistics, urban development, philosophy and film.
View all posts by Ben →
This entry was posted in English Phonetics and tagged Cockney, Dublin Accents, New York Accent, phonetics. Bookmark the permalink.

52 Responses to Dem and Dose: “Th” in City Accents