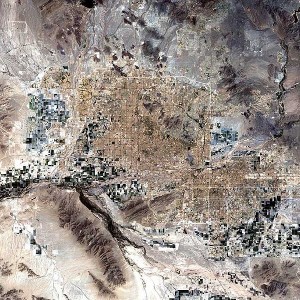 Since posting Americans: Intolerant of Regional Dialects? a few days ago, I’ve received a flurry of comments and questions about why Americans are less “accent conscious” than the British.

There are many reasons that we don’t recognize the differences between dialects in our own country (history, settlement patterns, the media, etc.), but I would like to focus on what I believe to be an important factor in this: population density.

I am going to compare two pictures to make my point (bear with me!). The first is a photograph of the main street of a small Welsh town of just over 6,000, Welshpool: 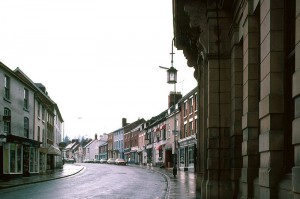 This next photo is of the main street of a comparably-sized American town, Monmouth, Oregon: 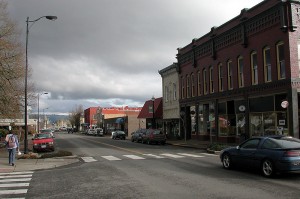 Now this is no slight to Monmouth, a lovely town in arguably the most beautiful region of North America. But the difference between a British “small town” and an American “small town” is glaringly obvious here. The UK main street is a bustling town center full of businesses and small flats. The American main street has no noticeable houses, mostly comprises of low-density buildings, and tapers off into suburbia a few hundred yards down the road.

Technology accounts for this difference. Most development in the UK occured before the advent of the automobile. Small towns in the British Isles were built as densely packed communities surrounded by land used for farming (or later, mining). Because there were no cars, towns had to be built like this to be economical. And these development patterns have remained into the 21st-Century.

In America, on the other hand, most of our major development occurred in the twentieth century. That means we built most of our homes and businesses at a time when dense communities seemed unnecessary thanks to cars. We built sprawling suburbs instead of tight clusters of neighborhoods. And in my opinion, this has a LOT to do with why we are less conscious of dialects.

The linguistic implications of these patterns are large. In Britain, dialects are packed together in tight little clusters because that is how cities and towns are built. In [many parts of] America, dialects tend to gently flow into one another over long distances. Because that is how America was built.

When people live close to a town center, when they walk to work, walk to do their shopping, in short, when they INTERACT with other people in the same small area, dialects form into concrete local phenomena. Growing up in small town America, by contrast, I would travel ten miles for a doctor’s appointment, fifteen miles to go to the mall, and my local high school had students from towns thirteen miles away. In America, dialects are [often ]dispersed, scattered to the wind, diluted by the force of suburban and auto-centric sprawl. And because of this, in my opinion, it is hard for us to perceive major linguistic differences.

This is not the say that we Americans don’t have different dialects. But because we [sometimes] have to travel far to find ways of speaking that differ from our own, we think of other accents as being from faraway lands, remote from our experience. We have many dialects in the US; they just aren’t within driving distance.

3 Responses to Dialects and Population Density