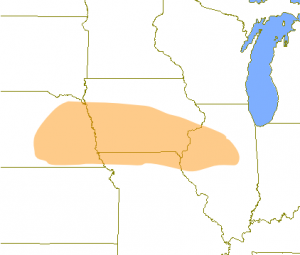 The region where dialects are closest to "General American" (Wikimedia, based on William Labov)

There is a good bit of evidence to support this. Brits have made accent mockery an art form. Whereas in America, we refer to “Southern Accents” or “New York Accents,” the British have a special taxonomy for this kind of thing. You don’t speak with a “Liverpool Accent” or a “Birmingham Accent” or a “Newcastle Accent;” you speak “Scouse,” “Brummie” or “Geordie.” And those terms are often unflattering.

Being a Yank, I have always thought this to be a relic of Britain’s class system. All those Victorian aristocrats sneering at Dickensian workhouses, those DH Lawrence novels about ladies seduced by coal miners. We have no history of this in the US, right? We find Southerners charming! The Bronx accent is rugged but treasured!

But it was reported this week that British singer Cheryl Cole was told to “lose the accent” in order to appear as a judge on the American version of the BBC’s X-Factor. Now Cole is from Newcastle, a city with perhaps the trickiest dialect to understand in the English-speaking world. But this accent is just as difficult to scrutinize by Brits as Americans. So what’s with the “lose the accent” memo?

Perhaps this speaks to a dirty secret: for all our friendliness, we Americans may actually be less tolerant of regional dialects than the British are. Given, we don’t mock you mean-spiritedly because of your accent. We just politely ask you to “tone it down.”

What leads me to this conclusion is our media. In the UK, TV shows boast a variety of regional accents. EastEnders, Coronation Street, and Queer as Folk all feature characters with stigmatized accents, yet these programs have enjoyed wild popularity. There are TV hosts with Northern accents, celebrities with West Country brogues, and when Irish or Scottish characters appear in British films, other characters rarely comment on their dialect.

In the US, on the other hand, it seems that 99% of the actors on TV talk with the same dialect. All newscasters talk the same. All commercial voiceovers sound the same. There is a relentless, maddening sameness that pervades the speech of anybody in the public eye. Indeed, there is little “regional” media presence. There are no soap operas set in small towns in the American South. There are no TV crime dramas set in Boston with authentic accents. We seem to have made a collective decision that regionalisms are best left at home.

In short, I suspect that Americans are developing ideas about what consitutes “Standard English,” while Brits, conversely, are starting to shake off these notions. (This change may have begun years ago: when I was a child, I remember my grandmother, a fan of BBC radio, noting that news reporters spoke like “Cockneys” these days.) America and the UK seem to be going in opposite directions. British accents are becoming more similar to one another while, paradoxically, the British public is tolerating regionalisms more. Meanwhile, American accents are becoming more fractured, while we cling more and more to “standard American English.”

But maybe I’m generalizing. Do you think we’re less accepting of accents that we used to be? Or more?

Ben T. Smith launched his dialect fascination while working in theatre. He has worked as an actor, playwright, director, critic and dialect coach. Other passions include linguistics, urban development, philosophy and film.
View all posts by Ben →
This entry was posted in Accent Reduction and tagged class and accent, dialect maps, dialects in TV, General American English (GenAm), stigmatized accents. Bookmark the permalink.