Why There are Less New York Accents in Movies 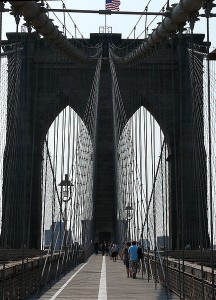 I hate how the mainstream media discusses dialects and accents. Journalists routinely fudge basic linguistic terminology, misquote experts, and indulge in all kinds of classist and/or racist assumptions.

Wow. It’s a wonder that print media is lagging behind the internet.

And yet this ridiculous editorial poses a valid question: why does it seem like there are so many Boston accents in films, and so few New York City accents?

Just a few decades ago, the opposite was true. In the 1970s, New York accents were everywhere (thanks to Pacino, DeNiro, et. al.). Likewise, I recall few films featuring the Boston accent until very recently. So what gives?

Here’s why I think New York accents are rare in movies these days:

1.) There just aren’t a lot of NYC accents in New York City anymore. It’s hardly a secret that the New York City dialect has mostly moved to the suburbs or to the further reaches of the Outer Boroughs (Canarsie, Bayside, etc.). In other words, it is becoming a suburban dialect. Those gritty New York dramas from the 70s are from a world long gone.

2.) It is hard to set crime dramas in a city without much crime. Local city dialects have usually appeared in films about crime. I’d say 75% of classic New York films feature crime as a central theme: On the Waterfront, The Godfather, Goodfellas, Taxi Driver, Dog Day Afternoon, The French Connection. Now that New York City is one of the wealthiest and safest cities in North America, it’s not a goldmine for gritty crime sagas.

3.) The Jewish middle-class is leaving the city. Another big source of New York Accents in film was the Jewish Middle-Class. I’m thinking Woody Allen, Neil Simon, and others of their generation. Sadly, much of this contingent has left the city for the suburbs or, if they have stayed in the city, their children are likely to have much milder (or even non-existent) accents.

4.) There aren’t as many local actors. In the 1970’s it seemed like every other actor in films had a New York Accent. The most famous actor training programs in the country were in New York, and attracted lots of local talent from working-class backgrounds. Not nowadays. Almost all of these schools have long since fallen from prestige, replaced by academic graduate schools. Acting in New York has become a profession for the wealthy and educated. And with this change, actors with New York accents have become a rarity.

5.) The Classic New York accent has become stigmatized. Between The Jersey Shore, The Sopranos, and The Real Housewives of New Jersey, popular culture has not been kind to the accents of the tri-State area. (I realize these three examples take place in New Jersey, but that’s because many of the people on those shows are originally from New York).

So then, why is Boston English more common in films these days? In my mind it’s a result of various talents “making it big.” There are now several Boston actors who have become major players in Hollywood (Mark Wahlberg, Ben Affleck, Matt Damon) in addition to a Boston author (Dennis Lehane) who has become one of the biggest providers of source material for crime films. I don’t think there is any sudden affection for Beantown amongst Hollywood producers.

It’s interesting, though, how accents go in and out of “popularity” in film. Can you think of any others?

Ben T. Smith launched his dialect fascination while working in theatre. He has worked as an actor, playwright, director, critic and dialect coach. Other passions include linguistics, urban development, philosophy and film.
View all posts by Ben →
This entry was posted in American English and tagged Boston accents, class and accent, dialects in film, New York Accent, stigmatized accents. Bookmark the permalink.