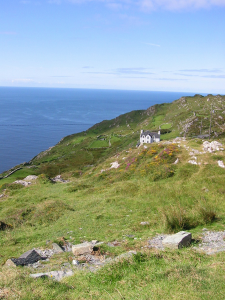 (In this series, we discuss different dialects using actual video or audio samples.  This page uses the International Phonetic Alphabet (IPA). For information about this notation, please visit my page of IPA Resources.)

In Ireland, Cork means something more than the stopper on a wine bottle. It is also the name of the city of Cork and the surrounding county, also named Cork. (“Cork” has nothing to do with the aforementioned wood by-product: It is an anglicization of Irish “Corcaigh”).

Cork is known for its rugged beauty, its rich history, and (of course) its unusual accent. The Cork dialect is often described as musical, and indeed, it has an oddly “sing-songy” ring to it that is mocked by some and beloved by others. To give you an idea of popular Irish conceptions of this accent, here is comedian Tommy Tiernan giving his comedic overview:

Ouch. Joking aside, what is the actual Cork accent like? Like many other dialects in Western Ireland, this accent seems more closely related to the Irish language, with a number of sounds obviously imported directly from Irish.

Let’s take a listen to a sample. Here is an interview with a local of Bantry, Co. Cork, footballer Graham Canty:

Pretty unusual, huh? A touch of Jamaican, perhaps a bit of Welsh. It is recognizably an Irish accent, but not the “leprechaun” accent you hear in popular culture. Here are a couple of observations:

1.) The dialect is fast, and sentences seem to run into each other. Everything is phrased differently, in other words, than most dialects of English.

2.) Words like “top” and “lot” are pronounced with a quite front, unrounded vowel: IPA a or ɐ (“tahp,” “laht,” “naht,” etc.). This feature is somewhat reminiscent to U.S. Great Lakes dialects like Chicago or Cleveland.

3.) The vowel sound in words like “goat” and “rope” can have a very open pronunciation, close to IPA ɔ: (hence “goat” sounds like gawwwt).

4.) Words like “about” and “round” are pronounced with a very tight diphthong, close to IPA ɔʊ. Thus, Cork “bout” nearly rhymes with American “boat.”

This last feature might be where Mr. Tiernan gets the notion that this accent sounds vaguely French.  The letter “r” in this accent has a very “throaty” quality to it.

Oddly, I haven’t been able to find a lot of really good samples of Cork English online. There are plenty of Dublin accents, Belfast accents, and what not, but Cork is a bit elusive. It seems this is yet another dialect that locals lose the minute they move away from their home town. Which is a shame, because it’s quite a pretty accent.

That being said, our sample speaker is on the young side (Mr. Canty was born in 1980).  So it’s safe to say Cork English isn’t fading anytime soon.

Ben T. Smith launched his dialect fascination while working in theatre. He has worked as an actor, playwright, director, critic and dialect coach. Other passions include linguistics, urban development, philosophy and film.
View all posts by Ben →
This entry was posted in Irish English and tagged stigmatized accents. Bookmark the permalink.