Dublin: A Tale of Two Accents 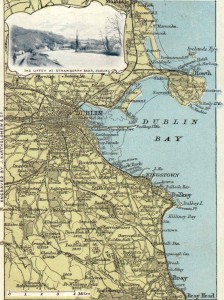 NOTE: This post uses the International Phonetic Alphabet (IPA). For information about this notation, please visit my page of IPA Resources.

Why does Dublin have so many dialects? Even compared to other cities in the British Isles, the city has a startling amount of linguistic diversity: Although London (for example) has a number of accents, the poshest aristocrat and the most rugged Cockney at least seem to be part of the same dialect spectrum. In Dublin, however, the social classes seem to be living on different planets entirely.

To illustrate this point, I am going to reference video clips of two Dubliner celebrities of different backgrounds. First, take a quick look at Aiden Gillen of BBC’s Queer as Folk and The Wire on America television. Here’s him accepting an award for the latter program.

Gillen grew up in the suburbs, and his accent is notably mild. (He has spent some time in the UK and America, but not enough to alter his accent radically, in my opinion). His speech has a flat, measured intonation that reminds me of an American, an impression which is enforced by his tight dipthongs: “face” is pronounced [feɪs], rather than the more popular Dublin [fɛɪs]. When Dubliners have expressed to me that they feel like people in their city are starting to sound like “Yanks,” this accent is probably what they are referring to. This is the Irish accent most easily comprehensible to outside listeners.

Then there is Damian Dempsey, an Irish singer-songwriter who grew up proudly working-class on Dublin’s Northside. Check out this interview he did with an Irish-American newspaper.

It’s a world of difference. Suddenly we’re talking about an accent as inscrutable to outsiders as Glaswegian. Dempsey speaks with a “cramped” vowel system that is so unusual it’s hard to even analyze. Notice the pronunciation of “wiser” as IPA [wəizə] (sounds a bit like “woyzer”). This is a major dividing line between the working- and middle-class accents. This dialect is so different from Gillen’s that they might as well be on opposite sides of the world. And yet both are Dubliners.

So what is going on here? Well, according to Raymond Hickey, something of an expert in the field of Irish dialect study, Dublin is heir to two distinct linguistic traditions. The first is the Working-Class Dublin accent, which harks back to the earliest days of modern English. The other tradition is that of the Anglo-Irish aristocracy which emerged in the city in the 18th and 19th Centuries. One dialect was largely preserved up to the present day; the other morphed into the “suburban” dialect we hear among most middle-class Dubliners.

I am not versed enough in the history of the city to offer any commentary on why Dublin remains so divided in terms of dialect. I am a bit suspicious, however, when people of different backgrounds speak with wildly different accents in the same city. It’s an indicator of an educational and societal chasm that has not being bridged.

Ben T. Smith launched his dialect fascination while working in theatre. He has worked as an actor, playwright, director, critic and dialect coach. Other passions include linguistics, urban development, philosophy and film.
View all posts by Ben →
This entry was posted in Irish English, Uncategorized and tagged class and accent, dialects in TV, Dublin Accents. Bookmark the permalink.

12 Responses to Dublin: A Tale of Two Accents