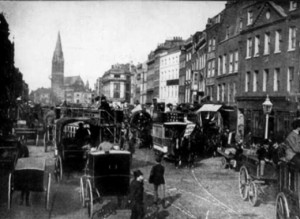 Cockney, the beloved working-class dialect of East London, may soon be extinct. Linguists will still study this dialect, and it will maintain a place in the city’s mythology. But its days may be numbered:  I have never encountered anybody of my generation, either personally or in the media, who speaks with a classic Cockney accent.

This is the subject of Henry Hitchings’ article in the Evening Standard, Language Can’t Stay Still–Just Listen to London. Hitchings points to the rise of Multicultural London English, the youthful dialect that mixes London English with a slight Carribean flavor, as one of the major factors contributing to Cockney’s demise. The situation resembles (albeit to a greater degree) the way that African American Vernacular English has weakened the scope of the classic New York City dialect.

But I can think of a better analogy: Classical Latin. On the surface, that seems like a ludicrous comparison. Yet both Cockney and Latin are examples of extinct (or dying) dialects that display a huge influence after their extinction. As Latin spread to its conquered territories, many world languages sprung up in its place: Spanish, Italian, French. Likewise, as features of Cockney spread to the suburbs and beyond, they created Estuary English, one of the most widespread dialects in England today.

Like Latin, Cockney isn’t dying out so much as it is consuming other accents. In the next few centuries, we may see this happen to other once-widespread dialects. I would not be surprised if the accent we know as General American will split off into so many different accents that GenAm itself will disappear. I’ve already seen some indication of this: regions that used to be strongholds of “normal” American English–California, Connecticut, the Great Lakes–now have dialects that are strikingly different than GenAm.

But Cockney, no matter how dead it is, will always remain one of England’s cultural treasures. Just as the classic Dickensian Christmas still captures Britain’s heart (even as December snow in London is no longer common), Cockney will eternally be a cornerstone of English heritage.

Ben T. Smith launched his dialect fascination while working in theatre. He has worked as an actor, playwright, director, critic and dialect coach. Other passions include linguistics, urban development, philosophy and film.
View all posts by Ben →
This entry was posted in British English and tagged Cockney, General American English (GenAm). Bookmark the permalink.