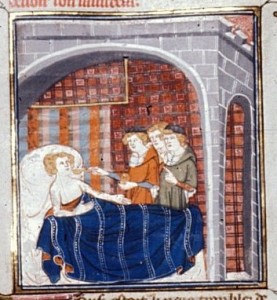 “‘Nauseous‘ doesn’t refer to being sick,” my 9th-grade English teacher told his class. “It refers to something that makes you sick.”

He sounded more apologetic than commanding; he didn’t seem to believe this “rule” any more than we did. Yet here we are in 2013, and the “nauseous/nauseated” beef remains. Type “common grammar mistakes” into Google, and the first result (a list titled “20 Common Grammar Mistakes That (Almost) Everyone Makes“) contains this nugget:

Contrary to almost ubiquitous misuse, to be “nauseous” doesn’t mean you’ve been sickened: it actually means you possess the ability to produce nausea in others. e.g., That week-old hot dog is nauseous. When you find yourself disgusted or made ill by a nauseating agent, you are actually “nauseated.” e.g., … Stop embarrassing yourself.

Criticizing grammar absolutists is like shooting sleeping fish in a styrofoam barrel, yet I’m disturbed that anyone gives this dated rule credence. In The Accidents of Style: Good Advice on How Not to Write Badly, author Charles Harrington Elster expresses a depressingly common attitude–“this rule is silly, but let’s follow it so not to upset anyone:”

This usage is so common today that it can no longer be called an outright error. But it is still a general misunderstanding–a “peccadillo,” as “Garner’s Modern American Usage” puts it–disapproved of by most modern authorities.

These aren’t “fringe” opinions. Bill Bryson gets into the act. And I have to confess that I have more than once eschewed “nauseous” for “nauseated” when writing. Most people can agree that this rule doesn’t much reflect actual usage, yet many of us are a skittish about letting it go.

I view Standard English as a dialect (or dialects, really), and as such, it evolves. American Standard English, in my opinion, has shifted over the past century so that “nauseous” refers to the state of being sick to one’s stomach rather that its cause. I can’t imagine there’s much debate about this, unless you think that “Standard English” has no relationship to spoken language.

It doesn’t require in-depth experiments with giant corpora to come to these conclusions. A mere search through the past three years of the New York Times produces 49 usages of “nauseous.*” Only 10% of the these (by my count) use the conservative meaning. It’s not just informal quotations, either. “Nauseous,” meaning “sick to one’s stomach,” appears in journalistic contexts as well. Here is a book review by Janet Maslin:

Ms. Brown deals seriously and convincingly with the illness, but she also uses it as a handy plot hook. So the pregnant Cordy is as nauseous as her ailing mother.

Here is Alexander Kumar in the Times’ science blog:

I will never forget that day — waking up unusually short of breath, later feeling nauseous and struggling for oxygen in between bites of lunch.

And for good measure, here’s a disinterested article about the Los Angeles bus system:

They hold their coffee cup several inches away from their seats — the start-stop of the bus means the coffee could spill at any moment. They do not read because the lurching bus too easily makes them nauseous.

As I said, some Times writers still use “nauseous” in the older sense. But it’s clear that at least some of the papers’ proofreading staff (hardly grammatical anarchists) accept “nauseous” in the way most Americans understand it. And why not? If we don’t accept the evolution of Standard English, we cause confusion, not clarity. If we actively try to preserve century-old definitions, how can we communicate to the readers of today?

*If you do try this yourself, you’ll notice that NYTimes.com’s search will say it yields “300+” examples. I’m not sure why this is, since you only view 49. I can’t tell if the list is entirely complete or not, but even if it’s a sample, it’s a useful one.