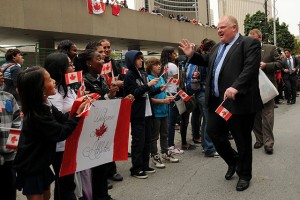 SNL is live and under-rehearsed, so I don’t expect its actors to nail unfamiliar accents in a week (although Killam is married to Canadian actress Cobie Smulders, perhaps explaining his basic Canadian Vowel Shift proficiency). So this really isn’t a criticism of Killam or Moynihan; as I’ve mentioned before, silly accents are part of the fun of impromptu sketch comedy. But because the actors weren’t going for 100% authenticity, the sketch illustrates some odd misperceptions that Americans maintain about Canadian speech.

First, both Killam and Moynihan used conservative, back variants of the vowel in “too” and “food.”  In fact, this vowel is the opposite in most “general” Canadian English; it’s noticeably fronted (especially after coronals; I’ve noted at least one Canadian pronounce “too” tʏ or ty̙). This would be an incredibly minor point were it not such a common mix-up; I’ve heard numerous Americans use cardinal /u/ when mimicking Canadians.

More tellingly, Moynihan answers a question posed by Killam at the sketch’s beginning with a Germanic-sounding affirmative along the lines of “yah!” There may very well be German/Scandinavian-influenced accents somewhere in Canada, but you wouldn’t hear “yah” from a Toronto native!

I think this suggests, however, that Moynihan (and I suspect this of other American Canadian-imitators) confuses aspects of Canadian English with aspects of other “Northern” accents. That “yah” seems imported from the Northern Midwest (Minnesota, etc.), and while both accents share a tendency toward conservative/back/monophthongal variants of the vowels in “goat” and “face,” that’s about as far as the similarities go if we’re talking about Canadian English in Toronto.

As I and others have pointed out, in fact, “Standard” Canadian English (such that it exists) is closer to marked California English, both sharing a distinctive counter-clockwise vowel shift. Keanu Reeves didn’t much alter his accent for Bill and Ted’s Excellent Adventure, yet Americans readily bought him as a California layabout (that’s not to say his accent was terribly accurate, just that many Americans assume Californians talk like Jeff Spicoli).

In other words, Americans often mix up “Canadianese” with a more general “Northernese” (I’ve heard people slip into Irish as well), possibly cued by the monopthongal vowels in goat and face*. That is why, I suspect, attempts to mimic our neighbors to the north sometimes fall short at Duluth, or else stray as far as suburban Dublin. Outside of certain renowned features, many of us don’t quite get what makes Canadian speech Canadian.

*Which, my impressions suggest, is seriously waning in urban Canadian English.

Ben T. Smith launched his dialect fascination while working in theatre. He has worked as an actor, playwright, director, critic and dialect coach. Other passions include linguistics, urban development, philosophy and film.
View all posts by Ben →
This entry was posted in Uncategorized and tagged california accents, Canadian Accents, vowel shifts. Bookmark the permalink.

46 Responses to When Americans Imitate Canadians