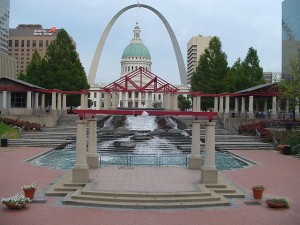 It’s easy to prematurely assume that certain rare American dialect features have become extinct. Such is the case with St. Louis‘ “Interstate Farty-Far” quirk, whereby words like “for” and “born ” are pronounced more or less as “far” and “barn” would be in most other American accents.

This indicates that St. Louis has preserved the historical split between the vowel in “force” and the vowel in “north.” I suspect that most Americans make limited distinction between the two by this point, but St. Louis seems to be a hold out.  Why St. Louis specifically does (or did) this, I have no idea. Nor do I understand why the vowel for “north” words is unrounded ɑ; for other accents that preserve the distinction, the difference tends to be between more open and more closed rounded vowels such as ɔ and o.

It should be noted that the city is a typical example of what might be called an “urban dialect microclimate.” Just as cities often have weather patterns strikingly different than the surrounding countryside, so too their accents can sometimes be strikingly discontiguous. St. Louis is located in the American Midland, meaning that its local accent should predicably be similar to the surrounding area, in between an Ozark Twang and the General American-ish accent of Nebraska.

Instead, St. Louis has an accent somewhat closer to cities like Chicago or Cleveland, probably owing to shared migration patterns. However, as other Great Lakes cities don’t have the “Farty-Far” feature (at least not to my knowledge), it’s unclear why it’s prevalent in this particular location.

(By the way, those with some knowledge of English Lexical Sets will note that “Interstate Farty Far” is likely not a real pronunciation; “four” is part of the “force” set, not the “north” set. This is perhaps an exaggeration similar to “New Joysey” or “N’Awlins,” although I cannot say for sure.)

Like many regional shibboleths, I long suspected that this one receded after World War II, perhaps still preserved by some elderly speakers. But I have heard at least one post-war-born St. Louisian use such pronunciations: Phyllis Smith, from the American version of The Office. (Although I find that this feature is less present in interviews, so it’s possible she plays it up somewhat for her character on the show.)

But I’ve never heard a St. Louis native born after 1970 use this term. So as entertaining a piece of local color as it is, “Interstate Farty-Far” probably doesn’t have much of a future.

Ben T. Smith launched his dialect fascination while working in theatre. He has worked as an actor, playwright, director, critic and dialect coach. Other passions include linguistics, urban development, philosophy and film.
View all posts by Ben →
This entry was posted in American English and tagged northern cities vowel shift, unusual accents and dialects. Bookmark the permalink.