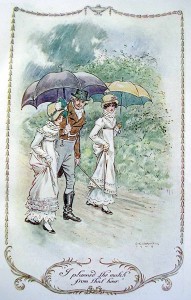 Illustration from Emma, by C.E. Brock

A reader recently wrote me with a question about the language in Jane Austen’s novels:

I see you’ve talked a little about accent in Shakespeare’s time, but do we know how English people sounded during the Regency era? I think it’s watching all the Jane Austen adaptations that makes me wonder which things the adapters have gotten right and which ones they’ve totally messed up.

Good question! In my opinion, the era’s pronunciation dictionaries and guides provide abundant evidence (albeit circumstantial) for how “elite” English was spoken during Jane Austen’s lifetime. It was arguably during the Regency that such accents started resembling Received Pronunciation as we recognize it today. But of course, there were striking differences.

One obvious such difference was the vowel in “goat” and “go.” In adaptations of Austen’s work, actors tend to speak with a centralized diphthong, in line with contemporary RP (gəʊt, or crudely, “geh-oat”). In the early 1800’s, however, this almost certainly would have been a back vowel, resembling either that of a conservative American accent (goʊt) or the pure monophthong common in rural Irish English (got).

Then there’s the matter of /r/ and whether it was pronounced or not at the end of words like “car,” “nurse,” or “care.” As I’ve mentioned before, late-eighteenth-Century pronunciation guru John Walker advocated a pronunciation in between the firmly r-ful Irish English and the r-lessness of London speech. I’m not sure what Walker meant by this “in between” /r/, but it seems r-lessness would have been at least fairly common among the gentry by the time Austen published her masterworks.

Then there is the matter of the TRAP-BATH split, a salient feature of many contemporary English accents whereby words like “bath,” “dance,” and “demand” are pronounced with the “broad a” in “father.” One of the more perplexing sections of Walker’s Critical Pronouncing Dictionary concerns this question (emphasis added):

In other words, Walker advocates using the “broad a” in half, path, bath, and calf, but is less enthusiastic about “broad a” in dance, prance, plant, and similar words. Although I can’t say for sure, it seems likely that the split would have been somewhat inconsistent among England’s gentry in the early 19th-Century.

The bottom line, though, is that these differences are relatively minor in the grand scheme of things. It is far less an anachronism for Kiera Knightly to speak Received Pronunciation in Pride and Prejudice than for Jonathan Rhys-Meyers to do the same in The Tudors (not to mention his being an strapping guy in his early 30s). English has certainly changed over the past 200 years, but, one could argue, not as radically as it did in the time between Shakespeare and Austen.

Ben T. Smith launched his dialect fascination while working in theatre. He has worked as an actor, playwright, director, critic and dialect coach. Other passions include linguistics, urban development, philosophy and film.
View all posts by Ben →
This entry was posted in British English and tagged dialects in film, Received Pronunciation (RP). Bookmark the permalink.