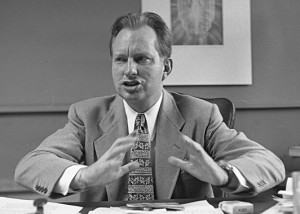 “Wog” is an offensive term in British English which refers to various immigrant groups. Its etymology is debated. One theory suggests acronymous origins, along the lines of “Worthy Oriental Gentleman” (which is less pejorative than contemporary usage would suggest). More plausibly, it may be an abbreviation of “Golliwog,” the racist doll popular in the Victorian era. Regardless of wog‘s provenance, it seems resolutely British; I’ve never heard an American use the term.

It did, however, seem to have been picked up by one of America’s most famous and controversial religious leaders, L. Ron Hubbard. Many associate his faith, Scientology, with the United States (and sun-belt states like California and Florida), but Hubbard spent the bulk of the 1960’s living in Essex and many of the Church’s ardent early proponents (such as David Gaiman) were British.

It was presumably in England that Hubbard began to describe non-followers as “wogs.” In her expose Inside Scientology, Janet Reitman elaborates:

Non-Scientologists were called wogs, a term thrown around liberally among church staff: “wog ideas,” “wog justice,” and “wog science.” Hubbard began to use this offensive British slang term in 1953 to denote any person who was not a Scientologist, in his estimation a “run-of-the-mill, garden-variety humanoid.”

Hubbard is notoriously enigmatic, so it’s a mystery why he would have borrowed such an offensive epithet. It’s possible he wished to evoke the inherent “foreignness” of outside institutions (this was a time when he was on the wrong side of various government organizations).

Or it’s possible that “wog” was a reinvention by a man famous for his ability to redraw the definitions of common words. Hubbard used everyday terms like “technology,” “ethics” and “open-minded” in a rather different way than what we are accustomed to. Controversies aside, I find him one of the more fascinating of 20th-Century’s word coiners for that reason; he created his own language, assembled from pieces of (but strikingly different from) everyday English.

It’s also possible Hubbard misunderstood the word’s offensiveness. Something I find fascinating about cross-dialectal communication is that it is very easy to underestimate the potency of offensive words outside your own variety of English. I am more than aware of how derogatory “wog” is, yet on some fundamental level, I’m not sure I get it.

Likewise, I would use “wanker” in a blog post title with little thought, but I would agonize over the decision to use “the N word,” no matter how objective the context. Yet Britain’s Advertising Standards Authority actually found “wanker” the slightly more offensive of the two terms among the British public (credit to Lynne Murphy for that tidbit of info). So perhaps Hubbard’s use of “wog” was an innocent mistake?

Ben T. Smith launched his dialect fascination while working in theatre. He has worked as an actor, playwright, director, critic and dialect coach. Other passions include linguistics, urban development, philosophy and film.
View all posts by Ben →
This entry was posted in English Phonetics and tagged profanity, words. Bookmark the permalink.

14 Responses to A Strange Chapter in “Wog”s Hateful History