Some British school administrators recently sought to “improve” their students’ Teesside dialect by urging parents to correct their children’ speech. The letter prompted outcry, for reasons well-summarized by Stan Carey of Sentence First. This photo of the note in question has circulated the internet: 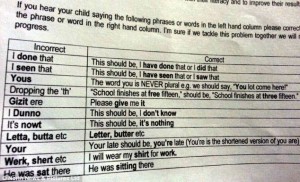 So what does the school want to correct, exactly? Dialect? Spelling? Pronunciation? True, the letter cites some actual dialect features: “Gizit here” (for “give it to me”) and “nowt” (for “nothing”) are obvious examples. Other “mistakes,” however, involve orthographic mistakes, such as the “you’re/your” quibble. At least in one case, the children’s accent is taken to task, for the “mistake” of fronting “th” so that “three” sounds like “free.” Needless to say, this is a very scattershot approach to language education.

I would also argue that two of the “offensive” terms are acceptable in spoken Standard English. “I dunno” is obviously just a reduced version of “I don’t know,” not a case of non-standard grammar. I also feel that “yous,” while out of place in an academic paper perhaps, can be used in conversation without it “de-standardizing” one’s language. I’ve heard the word used by Irish natives within otherwise academic discourse, just as I’ve heard “y’all” used by Standard-English-speaking American Southerners.

While I abhor prescriptivist attempts to “correct” dialects, I’m more disturbed by how muddled this attempt is. How should parents correct “letta/butta” and “werk/work?” Are these spelling mistakes? Mispronunciations? And what if one’s child genuinely wishes to express that “He was sat there?” (“Someone assigned him a particular seat.”)

The bottom line is, this letter seems to have been written by someone with a shallow understanding of the very language they seek to “correct.”

Ben T. Smith launched his dialect fascination while working in theatre. He has worked as an actor, playwright, director, critic and dialect coach. Other passions include linguistics, urban development, philosophy and film.
View all posts by Ben →
This entry was posted in British English and tagged Northern English accents. Bookmark the permalink.

36 Responses to The Teesside Controversy