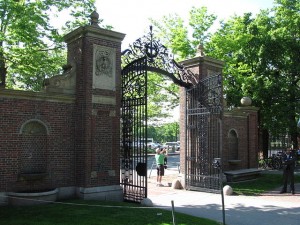 In linguist Tom Roeper’s excellent book on language acquisition, The Prism of Grammar, he makes this observation about Boston accents:

In Boston, there are two forms of r-lessness, heard in two ways of saying ‘Harvard:’ ‘Hahvid’ and ‘Haavid.’ The first is upper class and the second is decidedly lower class. A person from elsewhere in the country may not hear or notice the difference, but those who live in Boston will immediately detect it.

To put that more precisely, Roeper is suggesting that lower-class Bostonians pronounce “Harvard” with a front or central vowel, while the upper-classes opt for a back vowel.

I half-agree with Roeper, although I feel the statement needs slight modification. Bostonians will probably find “Hahvid” (hɑ:vɪd) to be both upper-class and old-fashioned. But if you lived in the city in the 1920’s, you would probably find that a Back-Bay Brahmin played a game of “cahds” (kɑ:dz), while an Irish-American Southie played “caads” (ka:dz).

Many accents seem (or once seemed) to follow similar lines. My impression is that those elusive old “Cultivated” Australian accents preferred ɑ over a, for instance. “Upwardly mobile” Britons from the North of England, I find, eschew the vernacular Northern a to the more RP-like ɑ*. In Dublin, the local pronunciation of “car” as kæ(r) is stigmatized by “non-local” Dublin English speakers, who lean more toward the rather American-sounding kɑɻ.

There are, it should be said, countless exceptions to this trend. For instance, I find that many younger middle-class New Englanders from traditionally non-rhotic areas rhoticize the vowel in “car” but maintain its frontedness: kaɹ. Nonetheless, there seems to be a cross-dialectal preference for ɑ (“ah”) over a (“aa”).

I don’t think there is much of a mystery why this is the case. The world’s great prestige accents, GenAm and RP (or perhaps, in the 21st-Century, London generally) opt for ɑ over a. What’s remarkable, though, is how extremely subtle this can be as a sociolinguistic marker. In most accents with ɑ, the vowel is already somewhat fronted: ɑ̟. And yet, this difference–between an open, near-back vowel and an open central vowel–is one that many careful listeners can nonetheless distinguish easily.

*I knew a young woman from Cheshire, for example, whose pronunciation of “nice bar” as na:ɪs bɑ: stuck out to me. The first word has very much the classic fronted, elongated Northern KITE vowel. The second word, however, opts for the more “Southern” ɑ.

Ben T. Smith launched his dialect fascination while working in theatre. He has worked as an actor, playwright, director, critic and dialect coach. Other passions include linguistics, urban development, philosophy and film.
View all posts by Ben →
This entry was posted in Miscellaneous Accents and Dialects and tagged australian accents, Dublin Accents, Northern English accents, phonetics. Bookmark the permalink.

6 Responses to Different Kinds of “Ah”