“N’Awlins” And Other Abbreviations 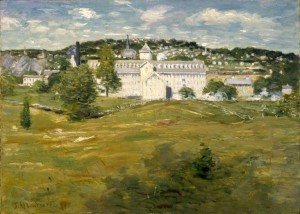 In an episode of Gordon Ramsay’s “Kitchen Nightmares,” a ridiculous (and non-local) restauranteur tries to convince Ramsay that New Orleans‘ pronunciation is “N’Awlins” (nɔ:lɪnz). As any New Orleanian will tell you, “N’Awlins” is largely a tourist affectation. You might as well insist that “New Jersey” is pronounced “New Joysey.”

Although my impression is that locals rarely say “N’Awlinz,” it probably has some basis in reality. Far from being the preferred native pronunciation, however, it’s likely the most extreme abbreviation in a series of progressively shorter variants: “New Orlee-uns” (nu: ˈɔ:lɪənz) –> “New Orlinz” (nu: ˈɔ:lɪnz) –> (“N’w Orlinz” (nwɔ:lɪnz) –> “N’Orlinz” (nɔ:lɪnz).

The Big Easy isn’t unique in this regard. I would cite several cities with similar “abbreviation continuums.” For instance:

I’m not going for strict accuracy here (I’m probably missing a step or two along the way). Nevertheless, it seems that there are often a few people (usually non-local) who are eager to suggest the pronunciation with the most elisions is the “local” one.

For instance, I had a semi-Canadian friend in college who insisted that the city’s “true” local pronunciation was “Trawno” and that Mississauga‘s corresponding pronunciation was “Missawga” (mɪsɒgə). Many Canadian obviously pronounce these words without the elided “o” and “i,” so this clearly doesn’t ring true.

What is true is that people are often inconsistent in how they pronounce their home towns. I grew up in and around a place called Willimantic, for instance, and while I often say this word exactly how it is spelled (wɪlɪˈmæntɪk), I have also been known to call it “Willmantic” (wɪlˈmæntɪk) and occasionally “Wimantic” (wɪˈmæntɪk). But that is not to suggest that “Wimantic” is the “local” pronunciation, but rather that Mohegan-Pequot is not a language whose phonemes find bosom buddies within the English sound inventory. So sometimes, in a rush, I tend to slur.

Place names, which rarely derive from modern English, are often awkward to pronounce. It’s no wonder Anglicized French or native American names like “Louisville” and “Willimantic” are subject to dropped syllables and consonants. And while sheer frequency might lead natives to slur these words more than outsiders, it’s not always the case that such abbreviations are the “correct” pronunciation.

Do you pronounce your home town in a consistent way?

Ben T. Smith launched his dialect fascination while working in theatre. He has worked as an actor, playwright, director, critic and dialect coach. Other passions include linguistics, urban development, philosophy and film.
View all posts by Ben →
This entry was posted in American English and tagged phonetics, words. Bookmark the permalink.

64 Responses to “N’Awlins” And Other Abbreviations