The Speech of Old L.A. 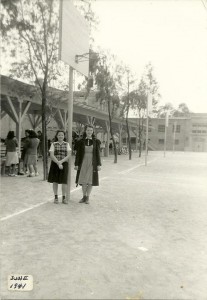 My grandmother grew up in Los Angeles. Her L.A. was not the L.A. of contemporary stereotype. It was a city with one of the world’s finest rail systems, gracious Victorian homes in forgotten neighborhoods like Bunker Hill, and a bustling urban core which has only recently approached its former glory.

My grandmother’s accent, to my ears, did not sound Californian. I found it Eastern, worldly and sophisticated.  As a child I associated her crisp diction with the British actors I saw on PBS. Likewise, my father remarked that she sounded rather Irish.

I reacted similarly to another pre-sprawl Angeleno, the late Julia Child. Here’s a video of her from a very early television appearance:

There are several ways Child’s accent differs from contemporary Californian speech. The sound she uses in words like ‘goose’ is very conservative and back; California English today is known for fronting this vowel. Note also that where young Californians raise the ‘short-a’ before nasals (so that ‘can’ sounds something like ‘keh-uhn’ or kẽən), Child generally leaves this vowel unshifted.

What most strikingly makes her accent sound rather ‘upper-crust,’ however, are Child’s t‘s. Most Americans ‘tap’ the /t/ in between vowels so that ‘part of‘ is more or less indistinguishable from ‘pard of.’ Child, however, tends to keep these t’s as, well, t’s (although not consistently so). Note that, at 7:14, she says ‘part of’ with a very aspirated, un-tapped consonant.

I don’t mean to suggest that it’s possible to pinpoint what an ‘old’ Los Angeles accent was. If anything, the city’s English has long been incredibly diverse, with its waves of emigres from Europe, Mexico and New York.

But it’s amazing how quickly California English is developing its own distinctive accents and linguistic identities. Still, like photos of LA’s streetcards, I enjoy glimpsing the Californian English that once was.

Ben T. Smith launched his dialect fascination while working in theatre. He has worked as an actor, playwright, director, critic and dialect coach. Other passions include linguistics, urban development, philosophy and film.
View all posts by Ben →
This entry was posted in American English and tagged california accents, celebrity accents, dialects in TV. Bookmark the permalink.

21 Responses to The Speech of Old L.A.