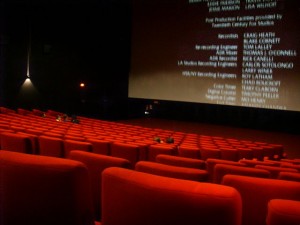 Today’s post can be filed in the ‘questions I don’t have answers to’ box.  Two words, closely related by subject, exhibit unusual variation in dialects of English. Both, incidentally, involve going to the movies:

1.) Theatre (or theater).* In General American English and related accents, ‘theatre’ can be pronounced so that it rhymes perfectly with ‘feeder’ (θiɾɚ). This contrasts with the pronunciation in British RP (and other non-rhotic Englishes, such as New England) where the first syllable is more of a lax vowel, almost rhyming with ‘fear the’ (θɪətə). Both pronunciations make sense given the patterns of their respective dialects.

But there is a third pronunciation heard in both Ireland and The American South, in which the word is pronounced as if it were the two separate words ‘the ater‘ (θi eɪtə(r)). That is, the ‘e’ and ‘a’ in the first half of the word are treated as two separate syllables.

Is this a spelling pronunciation? Does it predate the other two more common variants? And besides the two places I mentioned earlier, where else is this pronunciation common?

2.) Cinema. Most British dictionaries list a pronunciation of ‘cinema’ identical to the American version: sɪnəmə (i.e. ‘sin-uh-muh’). But another very common British variant is to pronounce the final syllable of this word with the ‘broad-a’ in ‘father:’ sɪnəmɑ: (i.e. ‘sin-uh-mah’).

John Wells wrote a post about this topic some years back, but had few answers. Is ‘cinema’ perhaps an attempt to match the French pronunciation of the word? (An interesting exception to the general rule that the British try to Anglicize French words where Americans make a vague attempt to preserve the original pronunciation). Or is there something else at play here?

I welcome all theories.

*Just to clear up a common misconception: It’s perfectly acceptable in America to use the ostensibly ‘British’ spelling of ‘theatre’ with a final ‘-re.’ I believe there is a vague rule to the effect that we reserve the ‘-re’ for descriptions of ‘theatre’ as an art form, but use ‘theater’ to describe individual auditoriums.

Ben T. Smith launched his dialect fascination while working in theatre. He has worked as an actor, playwright, director, critic and dialect coach. Other passions include linguistics, urban development, philosophy and film.
View all posts by Ben →
This entry was posted in English Phonetics and tagged General American English (GenAm). Bookmark the permalink.