Take / Have a Bath 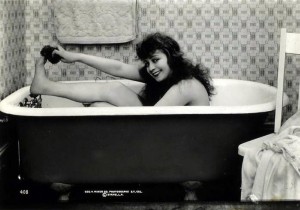 Differences between American and British English constitute a set of near-cliched contrasts (‘we say elevator, while you say lift!’). I would add to this list the ‘have a bath/take a bath‘ distinction: the British ‘have‘ a bath, while we Americans ‘take‘ one. A hackneyed metaphor for American assertiveness and British passivity is lurking in there somewhere.

‘Have’ and ‘take’ are examples of ‘delexical verbs,‘ which create an ‘implied’ verb suggested by the noun. Rather than saying ‘she bathed,’ we opt for ‘have/take a bath.’   Also ‘take a nap,’ ‘have a rest,’ or ‘take a vacation,’ which substitute for the verbs ‘nap,’ ‘rest’ and, uh, ‘vacate.’

To be fair, I can’t say if ‘take a bath’ is completely verboten in British English. But it’s striking how rarely Americans use ‘have.’ Many of my country(wo)men may object, ‘I can totally see myself saying have a bath.’ Yet Brigham Young University’s Corpus of Contemporary American English yields a mere two spoken occurences of this type, both in British contexts (one an interview with English actor Jeremy Northam).

Of course, Americans frequently use delexical ‘have.’ Note ‘have a party,’ ‘have a meeting,’ ‘have a soiree,’ ‘have a rendevous,’ ‘have a shindig.’ For reasons that are unclear, many of these seem related to socializing. So Americans say ‘have a shower’ if they are talking about a wedding shower, but (usually) don’t say ‘have a shower’ when referring to getting clean. Not sure if this constitutes a pattern, but it’s a striking trend.

But what is the pattern, anyway? What’s especially confusing are the various situations where both ‘take’ and ‘have’ can apply to a verb. Why can Americans ‘have a meeting’ or ‘take a meeting*’, but not ‘take a party?’ Why can we both ‘have a drink’ and ‘take a drink’ (the latter usually in the context of ordering said drink), but not ‘take a meal.’ And why do we invariably say we are ‘taking a trip,’ yet bid au revoir with the obligatory ‘have a nice trip?’

*Less common, but found in Hollywood-ish phrases like ‘I hear Spielberg took a meeting with Tom Cruise.’

16 Responses to Take / Have a Bath