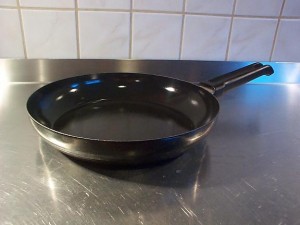 The last time I discussed the word ‘guy,’ a generic term meaning ‘man,’ I mentioned a rather fascinating way in which the word has evolved in American dialects. ‘Guy’ has come to become synonymous, in some situations, with ‘thing.’ For example, rather than asking someone to pass the frying pan, you might ask,

‘Could you pass me that guy over there?’

This strikes me as fairly unusual. I don’t believe anyone in the UK refers to everyday objects like frying pans or table lamps as ‘blokes.’ So how did ‘guy’ come to mean ‘thing?’

‘Guy’ is not the first word referring to humans that came to refer to non-sentient beings, of course. One might cite a similar use of ‘girl‘ (imagine a man trying to start his car in the wintertime, sighing in frustration, ‘the old girl’s on her last legs). But using ‘guy’ to refer to things seems much more common.

I wasn’t able to wrangle much in terms of research on the topic (even an unambiguous Google search such as “use of ‘guy’ to refer to inanimate objects” wasn’t helpful). So I’ll offer my own personal perspective on the matter. When I’m putting a way dishes, and ask my wife (in reference to a plate):

Where does this guy go?

…it’s reasonable to ask why I choose ‘guy’ rather than ‘thing,’ or merely ask ‘where does this go?’ For me, ‘guy’ adds a certain emphasis: I am talking about this thing, in my hand, right now.

Furthermore, ‘guy’ feels like more of an appropriate substitute for ‘plate.’ The word ‘thing,’ to me, refers more to something which I can’t classify. So, for example, if I were asking where to put the strange lemon-juicing device we have in our drawer, I might ask ‘where does this thing go?’ But for something as common as a plate, the use of ‘thing’ feels odd. And so I go with ‘guy.’

Anyone else out there who use ‘guy’ in this way?