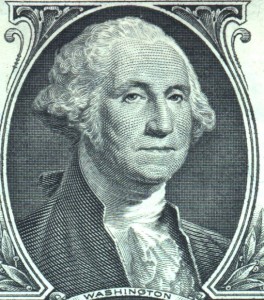 It’s the Fourth of July, the day when we Americans celebrate our nation’s independence from Britain. To celebrate (sort of), I am going to watch the HBO miniseries John Adams.

At the time of the series’ release, I was intrigued by a quote from actor David Morse, who portrays George Washington. Discussing the accent he used for Washington in an interview with The Onion AV Club, he explained:

The accent back then was probably nothing like what we think of as a Southern accent now or a New England accent now, so we tried to find the root of the accents. For Washington, it was a little bit of Cornwall, that western country English accent with a trace of farmer.

Here is a brief clip of Morse as Washington (He starts speaking at :38).

I enjoy Morse’s accent here, regardless of its strict accuracy. He gives us a hint of West Country (particularly those hard r’s), while maintaining the sense that Washington’s language was part of an earlier step in the evolution of American speech*.

Would there have been a West Country influence on the speech of colonial Virginia? The question is somewhat irrelevant, since most of 17th- and 18th-Century Southern England would probably sound rather ‘West Country’ to a contemporary Englishman. Outside of East Anglia, rhoticity would have been widespread, while the vowel in ‘kite’ would have had a more ‘raised’ pronunciation. Both features are typical of West Country English today. And these features were no doubt brought to the New World.

There is plenty of contemporary evidence that Virginia (or at least parts of Virginia) once had something of a ‘brogue’-like accent. Isolated islands off the coast still betray the influence of a West-Country like progenitor (note my earlier discussion of the accent of Tangier Island). Then there is Virginia’s ‘Tidewater raising,’ a similar situation to Canadian Raising whereby the vowel in words like ‘mouth’ is raised before voiceless consonants (so that ’bout’ may sound a bit like ‘boat’).

None of this is new, but it’s interesting to see an actor adopt an accent that reflects this history. I certainly prefer to the ‘Mid-Atlantic’ British-ish speech typical of so many actors portraying Washington!

*I should really give credit to John Adams’ dialect coach, Catherine Charlton.

Ben T. Smith launched his dialect fascination while working in theatre. He has worked as an actor, playwright, director, critic and dialect coach. Other passions include linguistics, urban development, philosophy and film.
View all posts by Ben →
This entry was posted in American English and tagged dialects in film, Rhotic vs. Non-Rhotic. Bookmark the permalink.