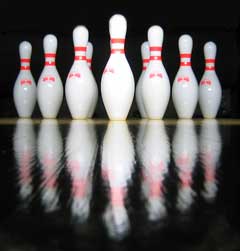 I’ve spent the past few days in Pennsylvania. Accents in the Southern half (or so) of the state tend to feature l-vocalization, the process by which /l/ at the end of a word or syllable becomes a vowel (usually some type of ‘w,’ ‘oo,’ or ‘o’ sound). The feature is common in a number of accents, but it is particular salient in PA.

I spent the weekend at a wedding, which for the casual dialect observer is a great way to listen to the local dialect of a particular region.  And being in Western Pennsylvania, I was treated to one of America’s most unique dialects, with its rounded vowel in words like ‘lot,’ its falling intonation in questions, and the numerous idioms native to the region (‘gumband‘ for ‘rubber band’ and second-person plural ‘yinz‘ being perhaps the most famous).

One of the things I noticed the most, however, was that ‘l’ is often vocalized in this type of Pennsylvania English even when followed by a vowel. For example, the word bowl will often sound like ‘bow’ (boʊ) to an outside observer; the word bowling will likewise sound quite similar to the General American pronunciation of ‘Boeing’ (boʊ.ɪŋ)*.

This is not what one might expect. It would be easy to presume, rather, that ‘l-dropping’ in PA is similar to ‘r-dropping’ (non-rhoticity) in British English. That is, the ‘l’ in ‘bowl’ is dropped, but present in ‘bowling.’ Instead, Pennsylvanians sometimes treat ‘l’ in something of the same way older Southerners treat ‘r.’ Just as the ‘r’ in ‘hearing’ might be dropped in Alabama, so the ‘l’ in ‘Polish’ might be dropped in Pittsburgh.

This naturally left me curious about the other English accents that vocalize ‘l.’ Is l-vocalization between vowel as common in, say, London?

*I’m simplifying with the transcription here. L is vocalized in a number of different ways.

Ben T. Smith launched his dialect fascination while working in theatre. He has worked as an actor, playwright, director, critic and dialect coach. Other passions include linguistics, urban development, philosophy and film.
View all posts by Ben →
This entry was posted in American English and tagged Pittsburghese. Bookmark the permalink.

14 Responses to Bowling or Boeing?