The Other American Dialects 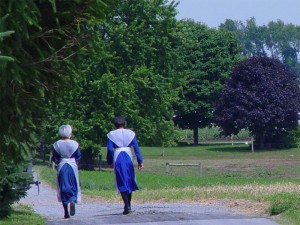 When we discuss ‘American dialects,’ we usually focus on English. And yet there are many other languages that have taken up root in the United States, a country with no real official tongue. Have non-English languages exhibited the same variety?

The question was on my mind while reading Steven Hartman Keiser’s recent Pennsylvania German in the American Midwest*, published by The American Dialect Society. Most people, when they think of Pennsylvania German, think of it as being native to the Amish in Lancaster County.  Yet the majority of its speakers live in small mid-Midwestern communities in states such as Wisconsin, Ohio and Iowa. And like English, an East/West divide has developed, with Pennsylvania on one side and the Midwest on the other.

One of the most striking differences between these two dialects slightly resembles the difference between Northern and Southern American English: the [aɪ] diphthong becomes a monophthong in Midwestern Pennsylvania German. The vowel is also often fronted and raised, so where a PG speaker from Lancaster County might pronounce the name of his own language, Deitsch, as [daɪʧ], a speaker from Ohio might pronounce this same word as [dæ:ʧ]. (For the phonetically uninclined, the Pennsylvania pronunciation uses the vowel in English ‘kite,’ while the the Midwestern pronunciation nearly rhymes with English ‘batch‘).

Many of the other differences relate to the degree to which dialects have (or have not) been influenced by English. For example, Pennsylvania German has adopted the norms of Pennsylvania English /r/ and /l/.  For the former, /r/ is often pronounced with the English approximant [ɹ] (this occurs in Midwestern PG as well, but less frequently). Pennsylvania PG also uses a ‘dark’ /l/ at the end of words, as in English, and in some cases has the tendency to turn /l/ into a vowel the way Mid-Atlantic English speakers do (for example, the word elsht, meaning ‘oldest,’ is sometimes pronounced as [ɛʊʃt]).

As this suggests, assessing differences in non-English American languages often involves the degree to which English interferes. I would suspect that different communities of Spanish speakers in America, for example, incorporate English loan words at different rates. But there is probably as much variation within communities in this regard as between them.

Keiser finds this to be the case when he studies rates of loan-word acquisition. While he suggests that the Lancaster Amish may use more English loans than other communities, the East-West chasm is less salient than differences between smaller enclaves (The Pennsylvania Amish seem to borrow English words more frequently than, say, Pennsylvania Mennonites).

Conversely, it’s difficult to discuss non-English American dialects without discussing the countries whence they came.  The Spanish spoken in a community of predominantly Dominican immigrants is obviously going to be very different from a Mexican-American community. The question is whether non-English languages are actually splitting into distinctive dialects within the US.

As Keiser’s study shows, this is quite possible. Yet English will perhaps always dominate such discussions. Are there other examples of dialect evolution in America that don’t involve interference from English?

Ben T. Smith launched his dialect fascination while working in theatre. He has worked as an actor, playwright, director, critic and dialect coach. Other passions include linguistics, urban development, philosophy and film.
View all posts by Ben →
This entry was posted in American English and tagged vowel shifts, words. Bookmark the permalink.

5 Responses to The Other American Dialects