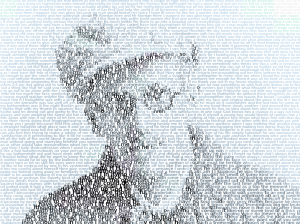 One of my ‘nerdiest’ passions is for conlangs, short for ‘constructed languages.’  Examples of these include Klingon and the various tongues in Tolkien’s books.  These are often created by creative linguists or people with an advanced knowledge of languages, although countless laypeople create them for fun.

Related to this concept are what might be called condialects. There are, in a number of works of fiction, intricately crafted varieties of English that are entirely made up.  Many of the most famous examples of these appear in popular or renowned works of literature and film.  Here are a few examples.

1.) Yoda from Star Wars.  Creating Yoda’s distinctive idiolect mustn’t have been very complicated.  It was simply a matter of changing the typical word order of English, which is normally Subject-Verb-Object to Object-Subject-Verb.  A very simple trick this is.

Interestingly, Yoda at times treats modal and auxiliary verbs as separate from the main verb.  For example, in one line, Yoda says, ‘ find your planet you will,’ splitting the verb phrase ‘you will find.’  So he seems to have a solid grasp of the finer points of English   morphology, but somehow misses some basic structural rules.  A flaw with Yoda-speak, perhaps. Then again, why is anybody in Star Wars speaking English in the first place?

2.) Finnegan’s Wake by James Joyce. Many Joyce scholars classify this as a language, but this classic of Irish literature is arguably in some kind of English, albeit of a very strange type.  Here’s a sample, from the first few pages:

Bygmester Finnegan, of the Stuttering Hand, freemen’s maurer, lived in the broadest way immarginable in his rushlit toofarback for messuages before joshuan judges had given us numbers or Helviticus committed deuteronomy…

I don’t have a PhD in Joyce Studies, so I can’t delve too deeply into how the work should be classified from a linguistic standpoint.  Also, I admittedly haven’t read it (sorry).  The novel is written in strange blend of poetic language, with bits of Norwegian, Biblical allusions, and Hiberno-English thrown in.  Again, I’m not quite sure if you could classify it a ‘dialect,’ but it’s at least worth an honorable mention here.

3.) A Clockwork Orange by Anthony Burgess. The language in this novel is the most unambiguously a condialect, and created by a trained linguist, to boot.  Set in a horrifying futuristic Britain, the protagonist speaks a Cockney-ish dialect that has a number of Russian-derived slang words, such as ‘droog’ (meaning ‘mate’), which derives from Russian druk and ‘devotchka,’ meaning girl.

One of my favorite aspects of the book is that Burgess creates a number of words that lie in between Russian and English.  Take ‘lubbilubbing,’ for example, which means fornicating.  The word apparently derives from Russian lyublyu, meaning ‘love,’ but is also believable as an entirely English neologism.

4.) Everything is Illuminated by Jonathan Saffran Foer.  A large chunk of this novel is narrated by a Ukrainian English-learner named Alexander Perchov, hence this charmingly error-ridded beginning to the book:

My legal name is Alexander Perchov. But all of my many friends dub me Alex, because that is a more flaccid-to-utter version of my legal name.

Foer’s detractors complained that too much of the book read like an elaborate misuse of the thesaurus function on MS Word. But there is a certain skill to employing just the right wrong word. (Using ‘facile’ in the above sentence instead of ‘flaccid’ wouldn’t have the same comic punch). It’s a lot less linguistically complex than what Burgess did, but much more of an achievement than critics give it credit for.

5.) Room by Emma Donoghue.  Like most entries on this list, it is highly debatable whether  this Irish writer’s harrowing novel about abduction is written in a ‘dialect,’ but it definitely has its own syntactic and grammatical oddities.  Donoghue conveys the story through the voice of a five-year-old boy, which normally might disqualify it as an example of condialecting.  However, this particular child lives in a tiny room with his mother: both are prisoner of a psychopath who has contructed an inescapable cell, although the boy doesn’t realize this until well into the book.

This results in an odd mother-child language that goes beyond mere child-speech. Objects are referred to as if they were almost people, sans article: ‘Room,’ ‘Skylight,’ ‘Lamp.’  With this comes an interesting system of genders (‘Plant’ and ‘Refrigerator’ are female, while ‘Watch’ and ‘Jeep’ are male).  The sun is referrered to as ‘God,’ pills are ‘killers’ (presumable a shortened version of ‘painkillers’), and television stations are ‘planets.’  The book examines what happens to a child’s mind when it’s cut off from the world, including a child’s language.

Those are a few examples I can think of off the top of my head.  Any other renowned condialects?

Ben T. Smith launched his dialect fascination while working in theatre. He has worked as an actor, playwright, director, critic and dialect coach. Other passions include linguistics, urban development, philosophy and film.
View all posts by Ben →
This entry was posted in Miscellaneous Accents and Dialects and tagged dialects in film. Bookmark the permalink.